How to Survive an “Emergency” Together

A black director and a Latina screenwriter light the fuse of an explosive, unlikely comedy. Sundance Film Festival darling Emergency premiers in selected theaters on May 20. One week later, it will be available via streaming on every territory where Prime Video operates. It is the last stage of a journey that began in 2016, when up-and-coming director Carey Williams and screenwriter KD Dávila met while participating in Project Involve, a workshop promoted by Film Independent to bring together new talent.

K.D. DÁVILA: We had never met before that program. When I was in film school, I felt like I only ever met writers really like you. Writers hang out with writers. We hang out inside our houses and our caves and do not want to talk to anybody. So it was really a great opportunity to just get to know, you know, directors and editors and cinematographers.

CAREY WILLIAMS: I pitched on the scripts that the writers wrote. As a director, I had to pitch on them! So I read Katie's script originally and was like, 'Oh shit, I don't know if I could do this because it's a comedic take on something very serious.

Emergency follows Sean (RJ Cyler) and Kunle (Donald Elise Watkins), two college friends whose plans for an epic night of partying get derailed when they find an unknown, unconscious white girl passed out in their living room. Calling 911 would be the easiest thing to do, but such a thing is never easy for two young black men.

How did you come up with the idea of Emergency?

KD DÁVILA: I am Latina. My family is from Los Angeles. My dad grew up in East LA. And so for me, the specter of police brutality was always very present in our community, and also, obviously, (in) the black community. I think that we wanted to tell a story about that, but in a way that was going to be more about the culture of fear that has been created; and what that does to young people.

Project Involve left the young filmmakers with a professional partnership and a 12 minutes-long short film of notice. In its first incarnation Emergency won six major awards, including a Special Jury Prize at the 2018 Sundance Film Festival and the Grand Jury Award for Narrative Short at the 2018 SXSW Film Festival. The concept was ripe for expansion, and Dávila worked the original idea into a feature-length script. It ended in the Black List, a survey of the best unproduced screenplays in any given year.

KD DÁVILA: It is funny because we had not intended it to be a peripheral concept for a feature. We wanted it to be a really strong standalone short film. We just wanted to make a strong short.

CAREY WILLIAMS: it is always kind of hard to make a movie. But hard in a good way, you know? This was my second feature, and they always have those challenges that you have to overcome and hurdles you have to get over when you are actually in pre-production or production. I guess the hardest thing with this probably might have been just COVID.

KD DÁVILA: We were sort of fortunate in the way that most of the film, the vast majority of the film, is between a very small group of people in a car and then outdoors. And then there are the parts that made it more challenging, which are the parties. We were lucky that we shot in that little golden window when we all thought that the pandemic was ending.

Another major story rocked the nation over the time it took Emergency to move through the production pipeline. On May 25, 2020, a white policeman murdered George Floyd in one of the most public displays of police brutality of our lifetime. The episode was another tragic reminder that America has failed to deal with the blight of systemic racism.

CAREY WILLIAMS: I was in post-production on another film. It was hitting me very hard to try to be creative on this project while all this was going on. I would try to use the film to compartmentalize and feel like, okay, 'I'm too focused on the art' but you can't really...I mean, as artists, we feel what's going on around us in every way.

Still, Emergency was able to demonstrate how hypocrisy flourishes in times of moral reckoning. In a sly throw-away joke, the camera shows a Black Lives Matter sign on the lawn of a belligerent white couple that harasses the distraught black kids parked in front of their house. 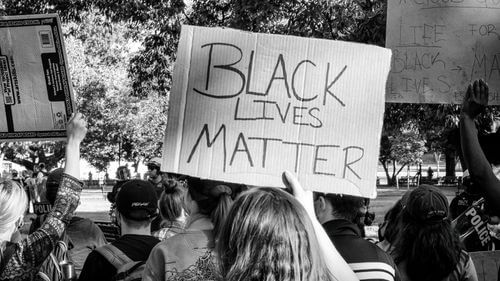 CAREY WILLIAMS: That was something we discovered in the scouting of locations. We saw a lot of those signs. Me and the production designer, we kind of came to the conclusion that we should put one of those in the yard of the people who do it because there is a certain amount of performative wokeness that happens with people like that. They will say these things, but they're not fully about that.

The confrontation with the woke white neighbors is one of many episodes Sean and Kunle encounter as they drive around with an intermittently unconscious Emma (Maddie Nichols) in the back seat. Their roommate Carlos (Sebastián Chacón) comes along for the ride, opening the movie to explore relationships between African Americans and Latinos.

I found this angle very special because it is hard to see the interaction between our communities explored in media, be it films or television series. Why is it so hard?

KD DÁVILA: I can really only speak for the Latino community, but generationally speaking, especially in my grandparents and parent's generation, there was so much of an emphasis on assimilation and on trying to rid yourself of Latino-ness and trying to just essentially aspire for whiteness. Especially with the older generations, there can be a bit of a reluctance to see brotherhood and sisterhood with other people of color.

A surprising plot strand examines an unlikely friendship triangle. Sean and Kunle are close as brothers, with Carlos outside looking in, yearning to have the same degree of intimacy. Very few movies consider the weight of friendship so seriously.

CAREY WILLIAMS: That was that was the most important thing to me with like this expansion was about the friendship and within that, being able to explore some themes of, you know, fear and anxiety and masculinity and those kinds of things and, you know, differences of worldview within a minority community, you know, those kinds of things is really important. And so, building those things into the nuances and complexities of their friendship, it is great to hear that it really lands

KD DÁVILA: Maybe I'm hopeful, but I see a lot more of Gen Z embracing the idea that vulnerability isn't weakness, right? Expressing love for your friends isn't unmanly? Like, you know, hug your homies? Yeah! Sisters are saying, right?

As the group tries to do the right thing by Emma and keep themselves safe, the conflict between the worldviews of the friends explodes. Kunle strives for success as if it will protect him from harm. Sean seems burnt by systemic racism and barely engages with the world besides satisfying his hedonistic impulses.

Is there a right way to engage with society, for young black men?

CAREY WILLIAMS: I love the difference of worldview between the two of them, as a part of their relationship as two young black men. You know, that's something that I think was special to us, that we can show two ways of seeing the world. I wanted to give validity to both of those points of view because they're both valid. There is harsh realism in Sean, he’s saying to Kunle `I'm trying to protect you because I love you’. He is not saying it explicitly, but that’s what it really is. There is a lot stacked against us. And what he is doing is very valid. At the end of the day, there is resilience in Kunle that will carry on.

Your movie is deadly serious about the problem of racism in America, but it also plays like a comedy of errors.

KD DÁVILA: To approach something with comedy, it just makes it easier to discuss, and process, and think about and reflect on. And that was important to both of us, too.

CAREY WILLIAMS: For me, it was a treat to do something comedic because most of the stuff I do is very serious. Being able to move into something with levity and humor, but has something to say…It was kind of eye-opening for me.

Available for streaming worldwide on Prime Video on May 27, 2022