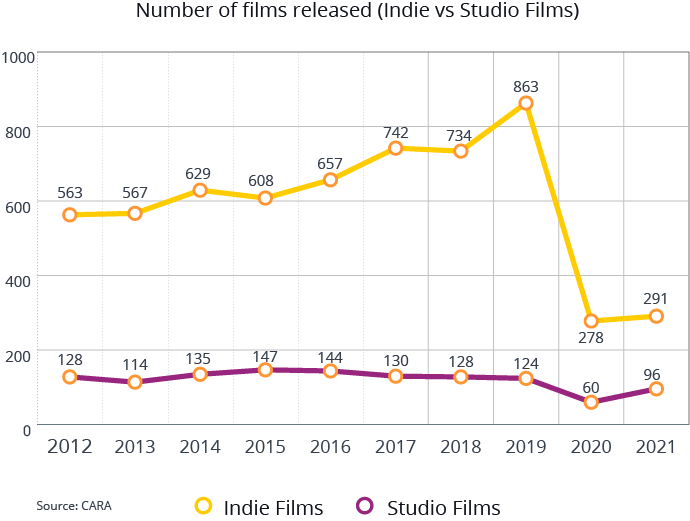 How many independent movies are produced each year?

There is no concrete answer as to how many independent films are produced each year. Thanks to advancements in technology – including more accessible filming and editing equipment, as well as digital platforms that make it easy to sell movies – it’s now possible for anyone to produce and distribute their own independent film. One way we can define the number of independent films released in a specific year is by examining all titles that opened and earned any studio-reported U.S./ Canada box office.

Using data from CARA, we can examine these numbers from two groups – films by one of the six major Hollywood studios (i.e. Warners, Disney, Fox, Paramount, Sony and Universal) versus all other non-studio films. This shows that non-studio films released the most films domestically in 2021 (291) compared to major studios (96).

of independent films do not get any theatrical release

This shows that, although independent movies are being produced in much larger numbers, a big chunk of them go unseen.

of independent films are able to recoup their investment

Out of those indie films that did make it to cinemas, the majority didn’t generate enough revenue to cover the costs of making, marketing, and distributing the movie.

of indie films recoup their investment during their first year

An independent film takes time to get recognized and to gain worldwide income.

What genres of independent films are most profitable?

When it comes to independent films that are most likely to be successful, horror movies are by far the most likely to turn a profit. The genres that have the poorest chances of success are sports movies and historical films, with recoupment rates of around 12% and 19%, respectively. Although the stories of sports stars like Senna and Diego Maradona are fascinating, they don’t resonate with audiences in the same way that big studio-produced films do.

The film industry supports 2.2 million jobs, pays out $192 billion in total wages, and comprises over 110,000 businesses. 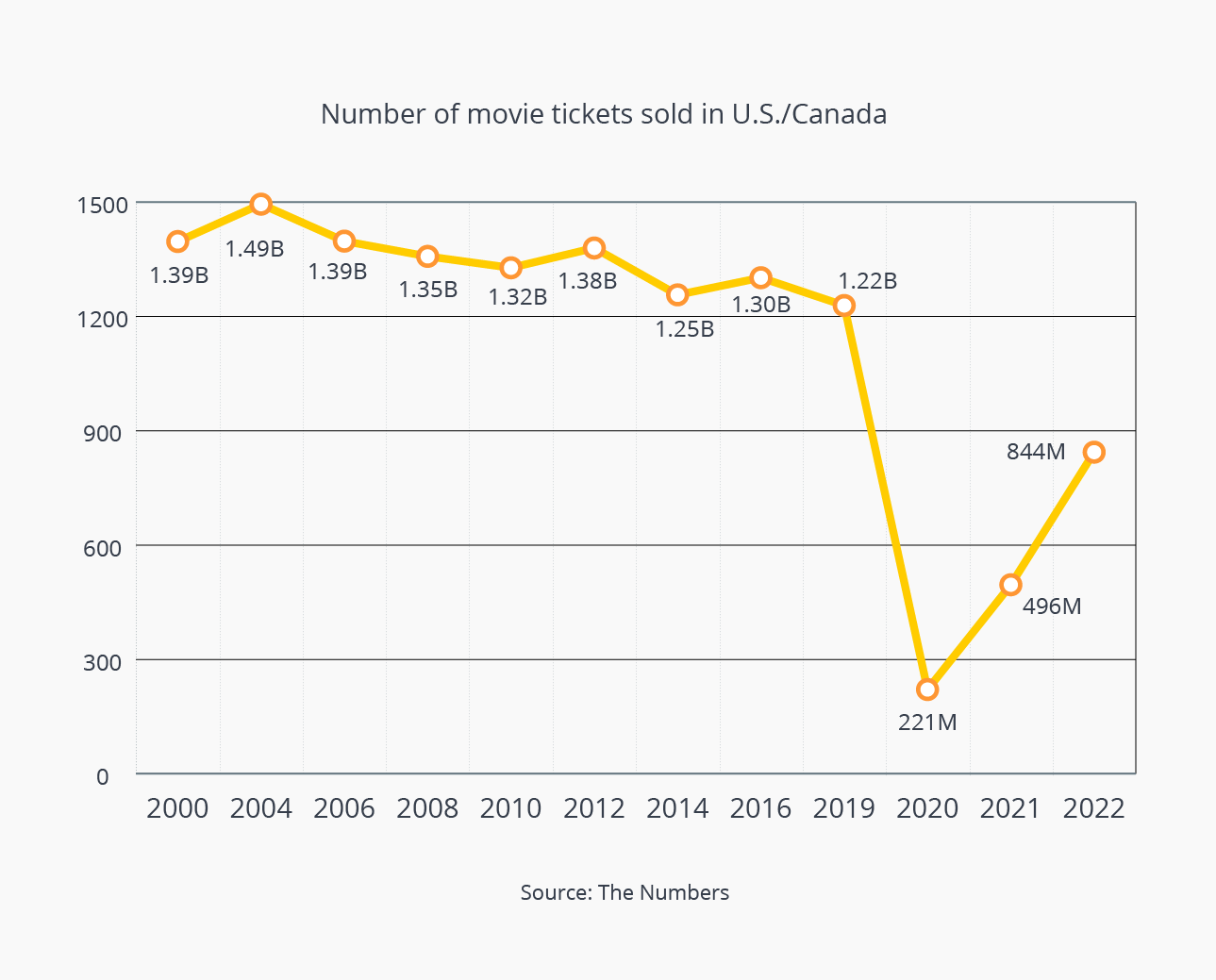 As we settle into a new normal, it’s clear that audiences are no longer content to just sit on the couch and watch movies. In 2022, movie theaters across the U.S. and Canada sold approximately 844 million tickets so far – an annual increase of about 281% from two years before.

Although this figure is impressive, it still pales in comparison to the nearly 1.22 billion movie tickets sold in 2019 – before the COVID-19 outbreak forced many theaters to close their doors.

China has the highest box office revenue worldwide at $7.3 billion which is more than the revenues of the U.S., Japan and the U.K. combined. France ranks fourth alongside the U.K., each grossing around $800 million. It’s also interesting to note that China’s box office surpassed that of the U.S. for the second time in a row, with most Chinese theaters staying open throughout 2021. 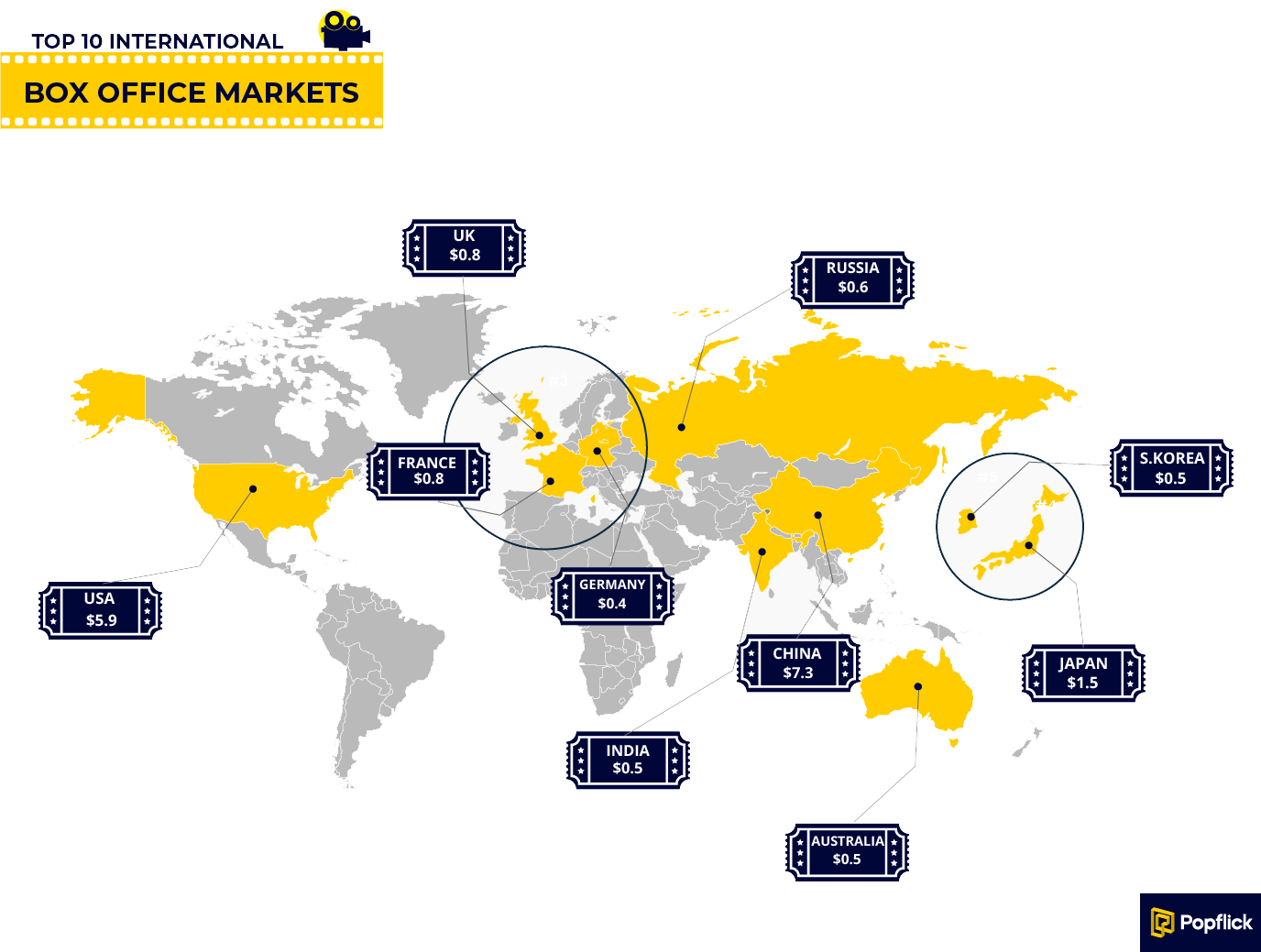 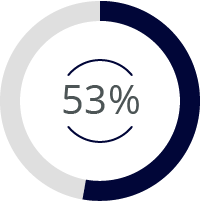 This includes people who did not attend the cinema at all. 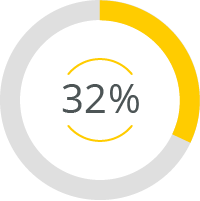 This includes people who attended the cinema les than once a month. 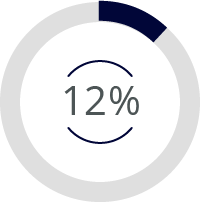 It includes people who attended the cinema once a year. 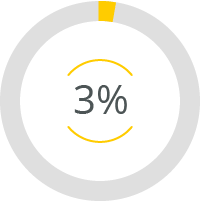 This includes people who go to the cinema oncrea month or more. 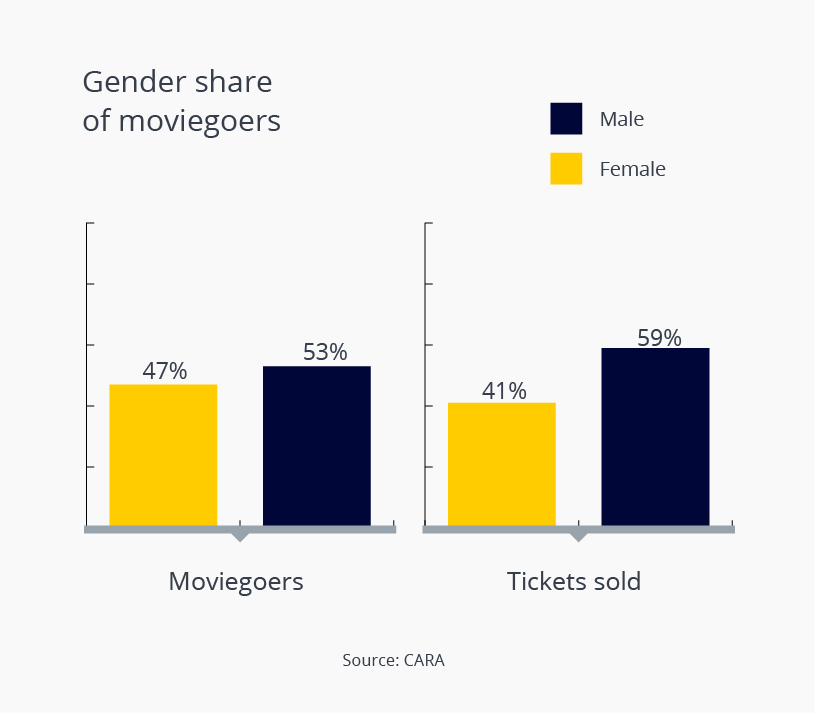 Men go to the cinemas more often than women

When analyzing overall attendance, it’s evident that more men than women go to the movies. In 2021, the number of moviegoers (people who go to the cinema at least once a year) and tickets sold was higher for men than women relative to their proportion of the population.

This is a stark contrast to 2009, when the moviegoing audience in the U.S./Canada was 52% female and 48% male – which is pretty much reflective of the breakdown among the U.S. population as a whole.

80% OF PEOPLE WATCH MOVIES ON TV

Of all the ways that American adults watch movies and TV, the highest proportion do so via traditional television services and online subscription services.

180 ORIGINAL FILMS WERE RELEASED ONLINE IN 2021

Home and mobile entertainment market in the U.S.

The home/mobile entertainment market in the United States was $32.3 billion in 2021, up 7% percent compared to 2020. The digital market increased by 11% compared to 2020, while the physical market decreased by 20%. Physical includes sell-through packaged goods and physical rental. Digital includes EST, VOD, and subscription streaming (SVOD).VOD spending does not include premium Video-on-Demand (PVOD). 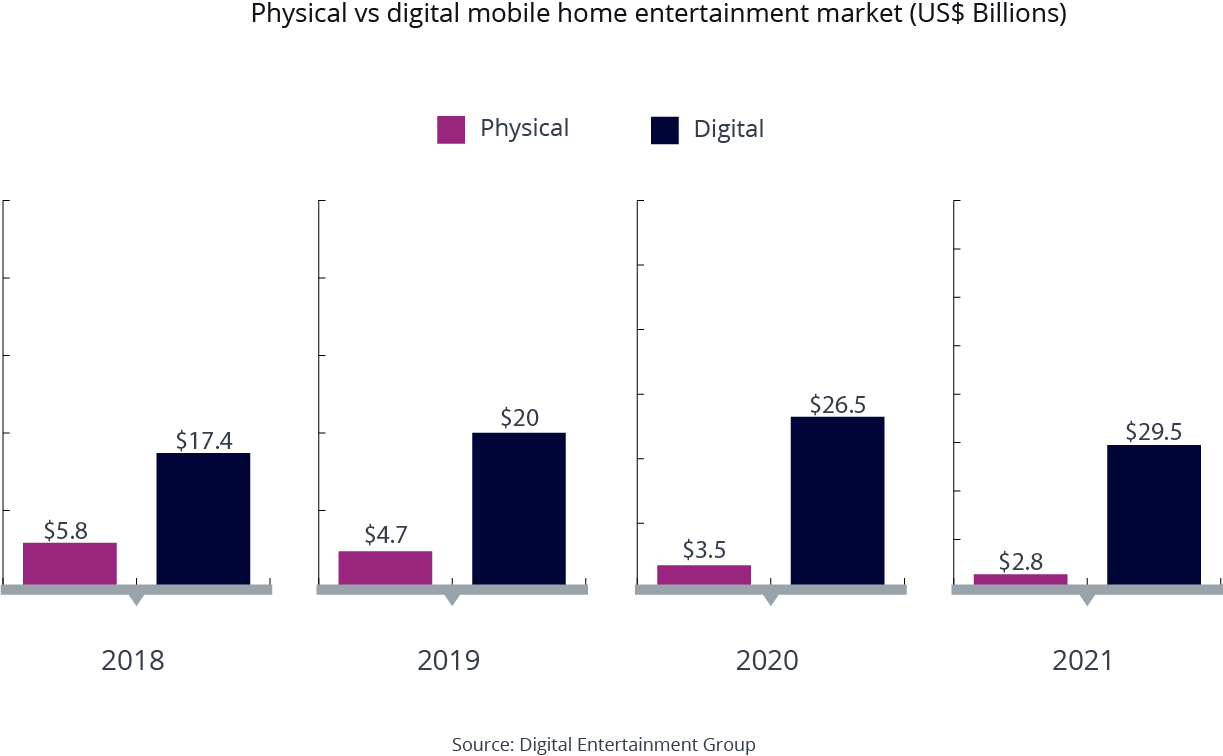 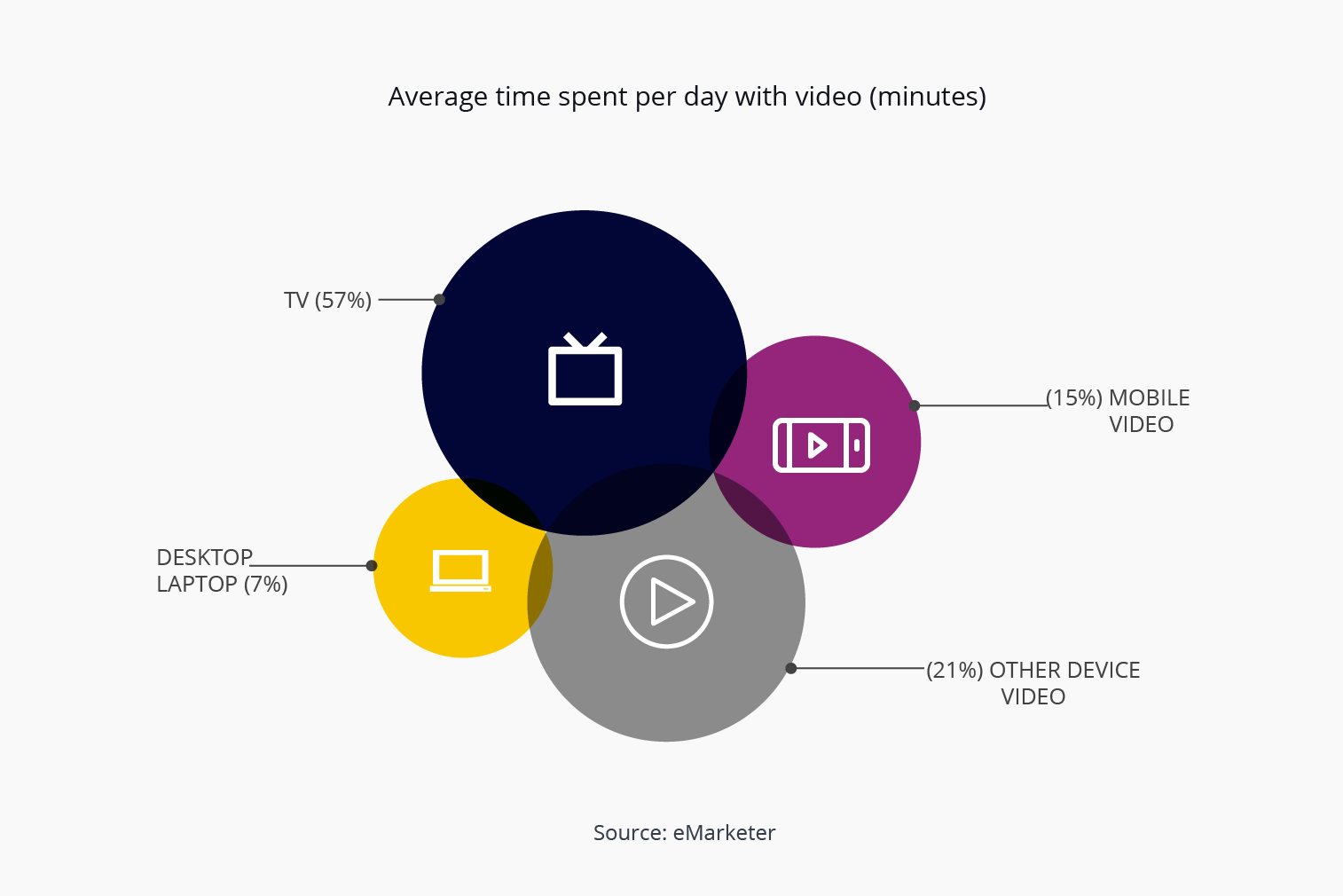 57% of the time people spend watching movies through their TV.

Other connected devices includes game consoles, smart TVs, and devices such as Chromecast and Roku.

Home and mobile entertainment market in the U.S.

In 2021, the gender composition of home/mobile viewers of all frequencies was generally similar to the population. Although physical disc adult viewers skewed slightly more toward men, the percentage difference was not large. 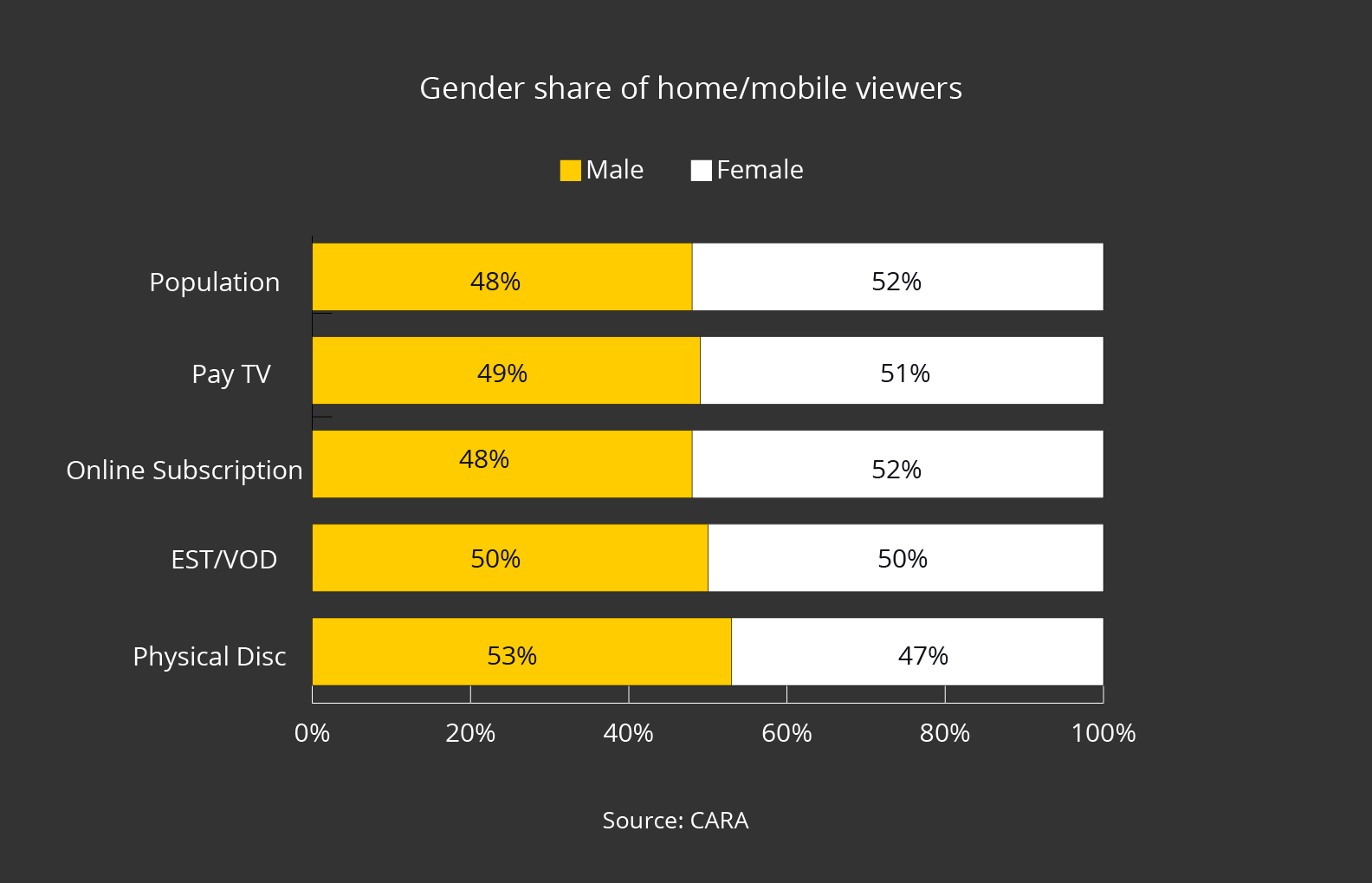 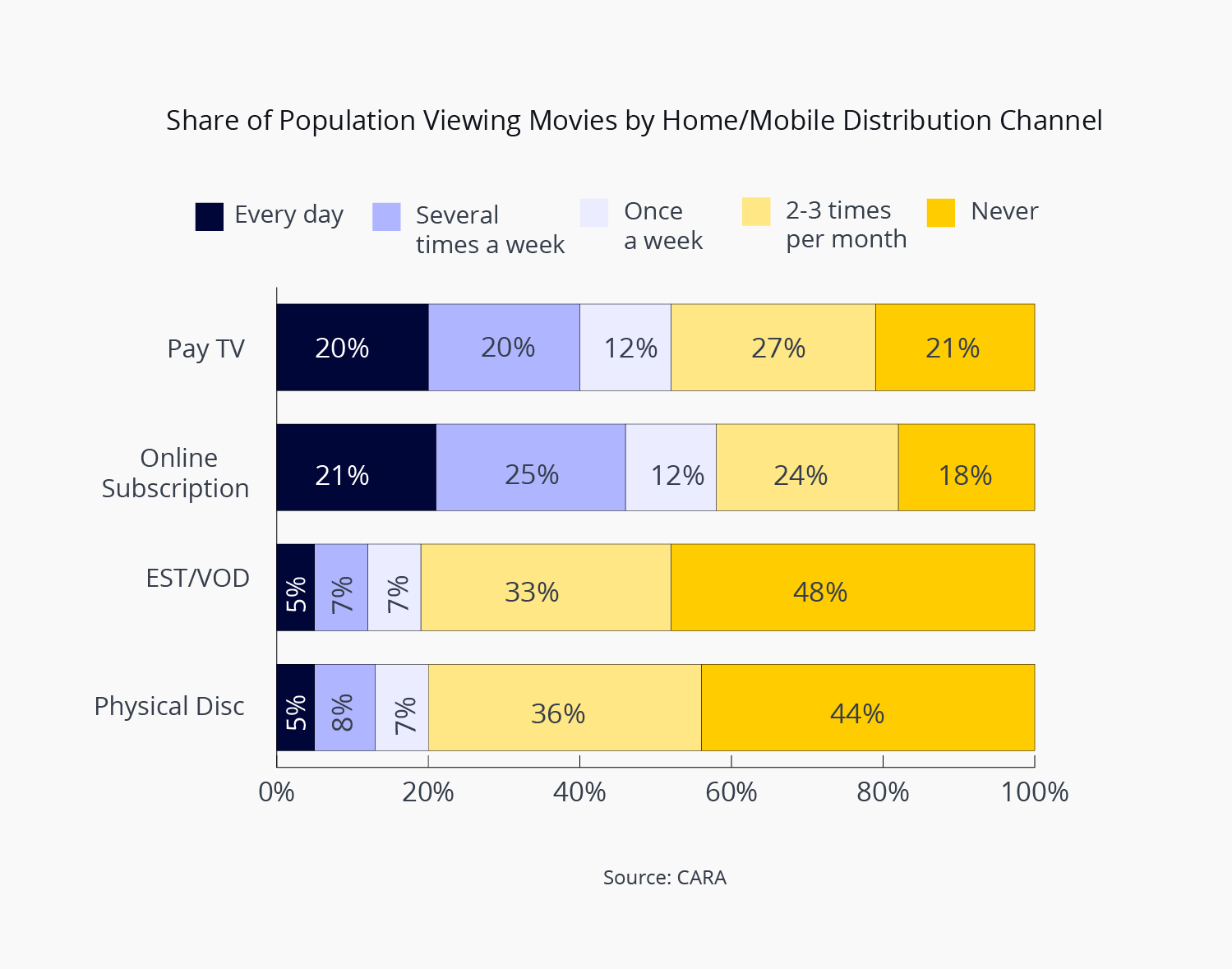