“It's a political act to make a film about love in a country divided by hate”: Aly Muritiba takes us

Private Desert is a luscious romantic thriller by director Aly Muritiba. It is easy to see why Brazil submitted it as its candidate for the Foreign Film category at the Academy Awards. The country is a character, just as much as the volatile cop and the trans woman who fall in love online. The plot speaks of the cultural moment we live in right now, contemplating the struggles of queer love in a social realm rife with repression. Popflick talked with Muritiba via Zoom as the movie began its limited release in the United States.

The project found the director just as he was looking for a change in tone. Says Muritiba, “Before making Private desert, I was coming off Rust (2018), my previous film. It’s a very hard-hitting social drama dealing with suicide among young people. It had a good run at film festivals, but in the end, nobody had a smile on their face! At one of those shows, I told myself: ‘I need to make something lighter, something that makes people smile!'”

You may smile at the end of Private Desert, but that does not mean this movie is devoid of tension. In a plot that resonates in the Catfish era, macho policeman Daniel (Antonio Saboia) falls for Sara, a mysterious woman who lives thousands of miles away in the northeastern town of Sobradinho. There, Sara is known as Robson (Pedro Fasanaro), a young man clashing against the expectations of his traditional family.

In current Brasil, the mere possibility of romance between these characters is a volatile proposition.

“Henrique (Dos Santos) showed me the script in 2018 when our country was going through a very difficult time”, says Muritiba. He is referring to the rise of ultra-conservative president Jair Bolsonaro. Imagine a more radical version of Donald Trump, and you are not getting close enough. “He is almost a fascist, and he won the presidency! We all were fighting so much. There was so much hate around. So I realized that to make a movie about love, in times when people hated so much, was political. It is a political act to make a film about love in a country divided by hate.”

Nobody speaks of politics in Private Desert, but you can imagine Daniel voting for Bolsonaro. He is the son of a retired military man in the throes of dementia. In a striking scene, Daniel walks on him donning his gala uniform, lovingly cleaning a gun. With surprising tenderness, he gets the man to surrender the weapon. Making Daniel a caretaker allows the audience to look further from his potential for violence and identify with him as a human being.

“The father was already dead in the original script. The first scene was his funeral. Everybody who read the script hated Daniel! He was grieving for 30 minutes, and you did not see him lovingly caring for another person. So we went back to rewrite, building this character who is somewhat responsible for the violent ways of his son.”

When we meet Daniel, he is under disciplinary suspension from his job as an instructor at the Police Academy. A training incident has left a cadet in a coma. Pending an investigation, he might be relieved from duty, or worse, sent to jail. He finds solace in his online flirtation with Sara. When she stops answering his messages, he ditches everything. The man travels over 1600 miles, from urban Curitiba, in the southern province of Paraná, to the small town of Sobradinho in northeastern Bahia.

Much suspense comes from anticipating his reaction upon discovering that Sara is, in Muritiba’s words, “more than a woman”. After a fleeting encounter in a nightclub, the movie switches points of view and leaves with Sara/Robson. It is a striking narrative gambit.

“The idea was to allow the audience to see the same story from two very different points of view, giving the people the chance to know and love both characters, so that they can understand them. It was important to see their dreams, their fears, and their pains”. 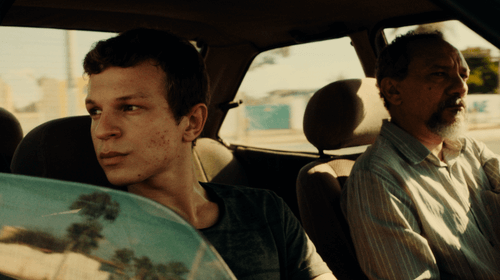 There is plenty of grief in Sara/Robson’s life, sent to live with his grandmother at a young age by parents who did not understand her/his sexual identity. The grandmother is caring and nurturing but makes him attend a conservative Christian church where “conversion therapy” is recommended to those who stray from the heteronormative path. In the United States and most developed countries, it is considered a form of torture, but endures in places where conservative Christianity is making inroads.

“This Christian population is growing year by year”, says Muritiba. “They used to be 8%, but that has grown to 30%, and as they grow, they spread their conservative values, reaching even the poorest. I wanted to show that in my movie. But also that there is still a place for love. The grandmother is devotedly Christian, but she protects her grandson.”

Muritiba makes a striking portrayal of the dramatic contrasts in contemporary Brazil. Daniel lives in the South, where white immigrants from Poland and Ukraine made a home for themselves. “When you escape from war, you lose everything. So, it is natural to become more conservative. It is natural to want to keep a traditional family structure. I come from the Northeast, which is more progressive. It was important for me to portray the contrast between these two regions of Brazil.”

That contrast finds a rich visual expression in the work of Cinematographer Luis Armando Arteaga. The first part, centered on Daniel, paints the city as an extension of his psyche. Curitiba is cold and gray, shadowed by dark storm clouds. Once he arrives at Sobradinho, the movie explodes with color and warmth. He is even shown in a beefcake shot, asleep in the backseat of his car.

The sensuality is natural and unassuming. The tension gradually eases as you begin to root for the characters, hoping that they can find each other. Neither of them identifies themselves in words as gay or trans. This is by design.

“Pedro Faganaro, the actor playing Sara/Robson is non-binary, gender-fluid. In our first approach, I asked “are you a he or a she?’. He said ‘call me as you wish. It makes no difference to me. Some days I’m a ‘he’, others a ‘she’. So I decided that the characters would not make statements about their identity. We would perceive their sexuality by watching how they present themselves to the world. For example, see Fernando (Thomas Aquino), Sara's best friend. We imagine he is gay because he works as a hairdresser and speaks in a certain way but never says ‘I’m gay”. We begin supposing Daniel is heterosexual, but he is in love with a person who is not necessarily heterosexual. I believe labels are not needed in this movie.”

Private Desert is playing in theaters. Muritiba is preparing his next feature film. Already in the can is the action series Cangaço Novo set for a 2023 worldwide premiere via Prime Video.