If the state of American animation got you down, here comes Little Nicholas to the rescue. The classic character from French children's literature comes to life in a surprising animated feature, as well as the two masterminds who created him: writer René Goscinny and illustrator Jean Jacques Sempé. You may know the first one from Asterix & Obelix. Sempé is better known in America as the author of many iconic covers for The New Yorker Magazine.

It started as a periodical comic strip in the late fifties and eventually compiled into a single book which soon achieved classic status. Flash-forward to 2022. Co-directors Amandine Freon and Benjamin Massoubre premiered Little Nicholas: Happy as Can Be at the Cannes Film Festival and now find their movie on the shortlist to get an Academy Award Nomination for Best Animated Feature. It is a beautifully complex family film. The gentle, sly comedy of the Little Nicholas stories alternates with episodes from his authors' lives. We spoke with Massoubre as the movie begins its theatrical trek in the United States.

Popflick: How did you get involved in bringing Little Nicholas to life?

Benjamin Massoubre: I have known Aton Soumache, one of the producers, for years. I started my career in the early 2000s, and one of my first jobs was working as an assistant editor on the special effects of La Peur du Loup (2001), one of the first shorts Aton produced. We did some animated series. Then, we went our separate ways for years. We connected again on a movie called Little Vampire (Joann Sfar, 2020), which I edited. Back then, he was looking for someone to help director Amandine Fredon on the narrative side of the movie, with Anne Goscinny (daughter of René Goscinny) on the screenplay.

He knew how much I loved Little Nicholas and the Sempé universe. I come from a long line of school teachers. My grandfather was a teacher, and so was my father. Both of them used Nicholas as a learning tool. The book has been around in my home for years. So I knew I was a good choice because I was involved emotionally with the book. 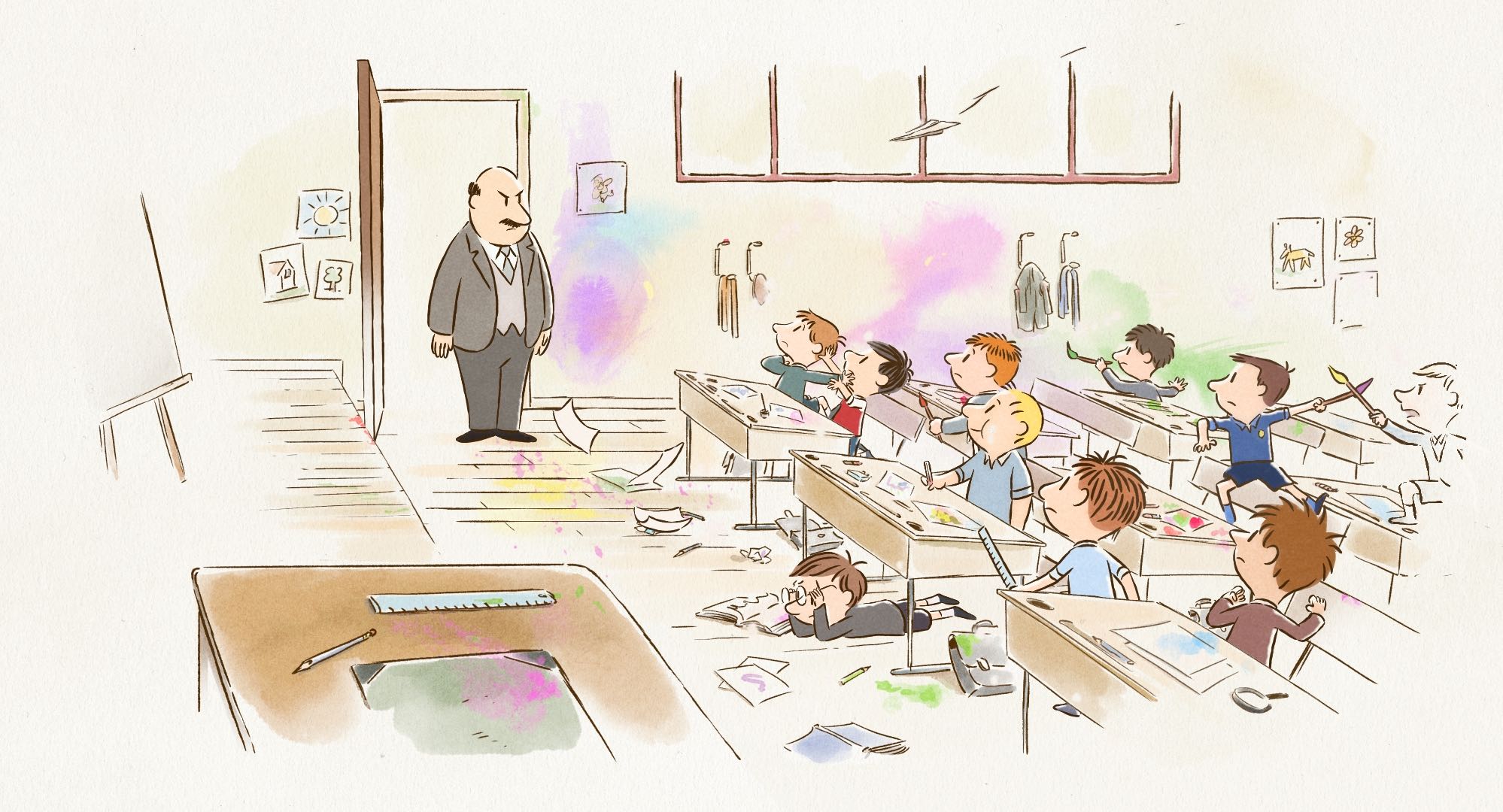 Popflick: Was it intimidating to direct this movie?

Benjamin Massoubre: Yeah, it was! Sempé and Goscinny are huge in French pop culture. Sempé is one of the best illustrators of its time worldwide. And Goscinny had a decisive impact on French humor and on French comics. So yeah, I was intimidated! But when you are scared, you have to work, you know? So we did a lot of research on their lives and their work. We have seen every footage, read every interview, and everything they published, both of them. It was like getting a Ph.D. in Sempé and Goscinny. We found some stuff that really inspired us. The two guys were robbed of their childhood. Goscinny spent a big part of his life in Argentina and lost part of his family during the Holocaust. Sempé suffered abuse from his stepfather. That is where we found the arch of the movie. They created this perfect childhood for Nicolas to live in, which is something they could not do themselves.

Popflick: Did you find anything that made you look at their work with different eyes?

Benjamin Massoubre: Yes! We discovered that there are things that look childish at times but are very difficult to make. There is a lot of work behind Nicholas' naive style. I was surprised to see how difficult it was to recreate Sempé’s work, even with a crew of great animators. And on the other end, Goscinny started publishing in the early fifties until his death in the late seventies. Diversity and relationships between men and women were seen and lived differently back then, but there are very few off notes in his work. I was happy to discover how modern his open-mindedness was. It is really alive, even today. 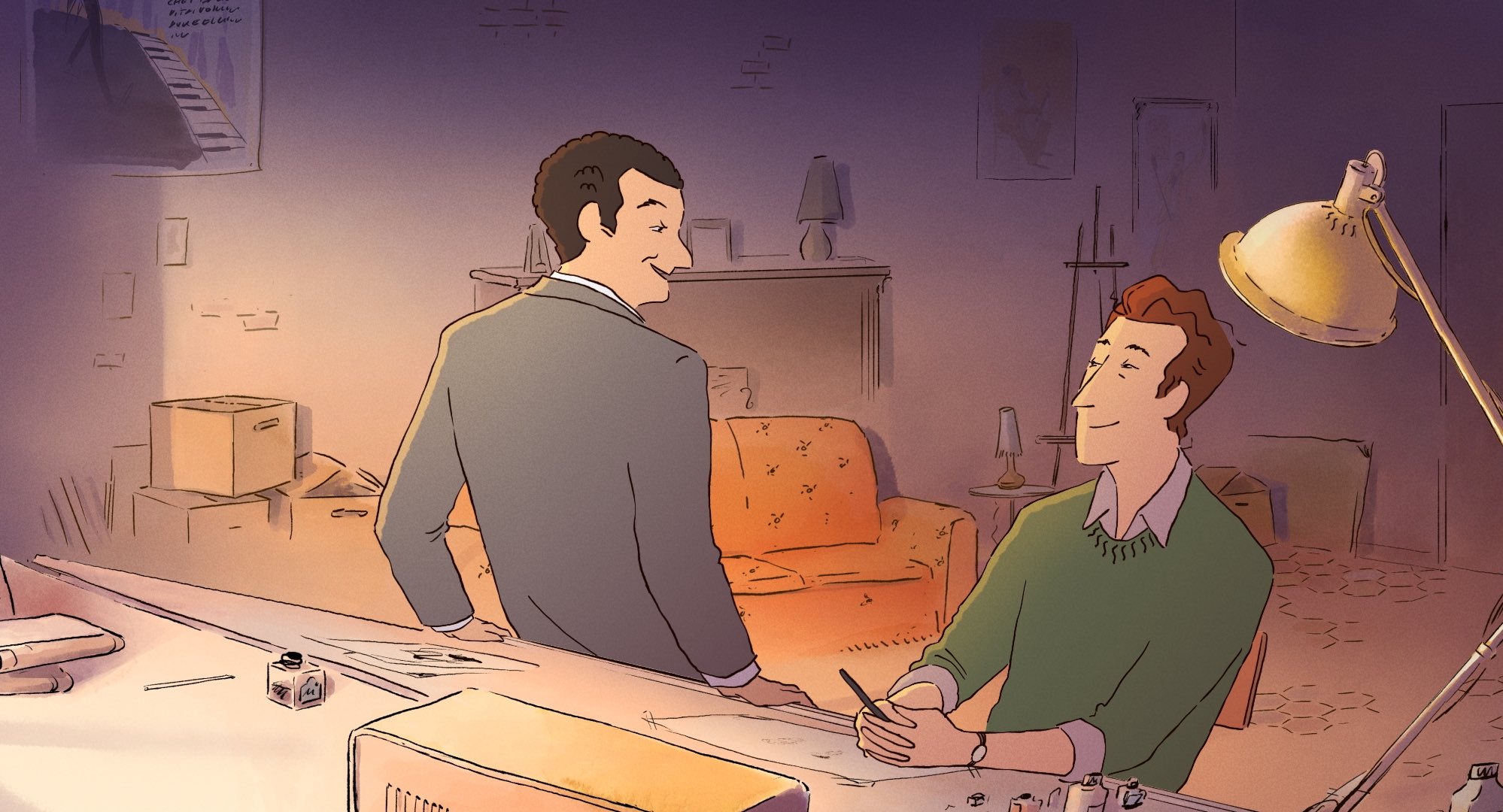 Goscinny and Sempé, hard at work on Little Nicholas / Photo courtesy of Buffalo 8

Popflick: You could have produced a straight adaptation of the Nicolas stories but decided to combine them with biographical episodes. Why go that way? I guess market-wise, the choice made the movie harder to sell.

Benjamin Massoubre: It was, actually. Little Nicholas is one of the most well-known, if not the most well-known books in France. It had already been adapted three times as live-action films, but they stretched the plot of the original short stories or glued them together. We wanted to stay true to the short story format and mix it with the stories of the creators. It was a way to pay tribute to the work of Sempé and Goscinny. There was something beautiful that we all wanted to explore: the relationship between a writer and an illustrator. We have never seen that before in a movie! So it was exciting to try it and make a movie about their friendship, but also about the creative connection between two people who do completely different stuff.

Popflick: Were you concerned about ending up with a movie that could be too serious for kids and too light for adults?

Benjamin Massoubre: What we wanted to do from the beginning was stay true to Goscinny and Sempé's work. And one of the big things about their work is that it is accessible. Everybody can enjoy it, from six years old to 70 years old. So we wanted to make a movie that was really a family movie, but not like an adult movie with some jokes for kids inside of it. Or a kiddie movie with a few themes for adults in it. We wanted to make a family movie that talks to everybody. I like to think that it is fluid, and everybody can understand it and find some great stuff in it. 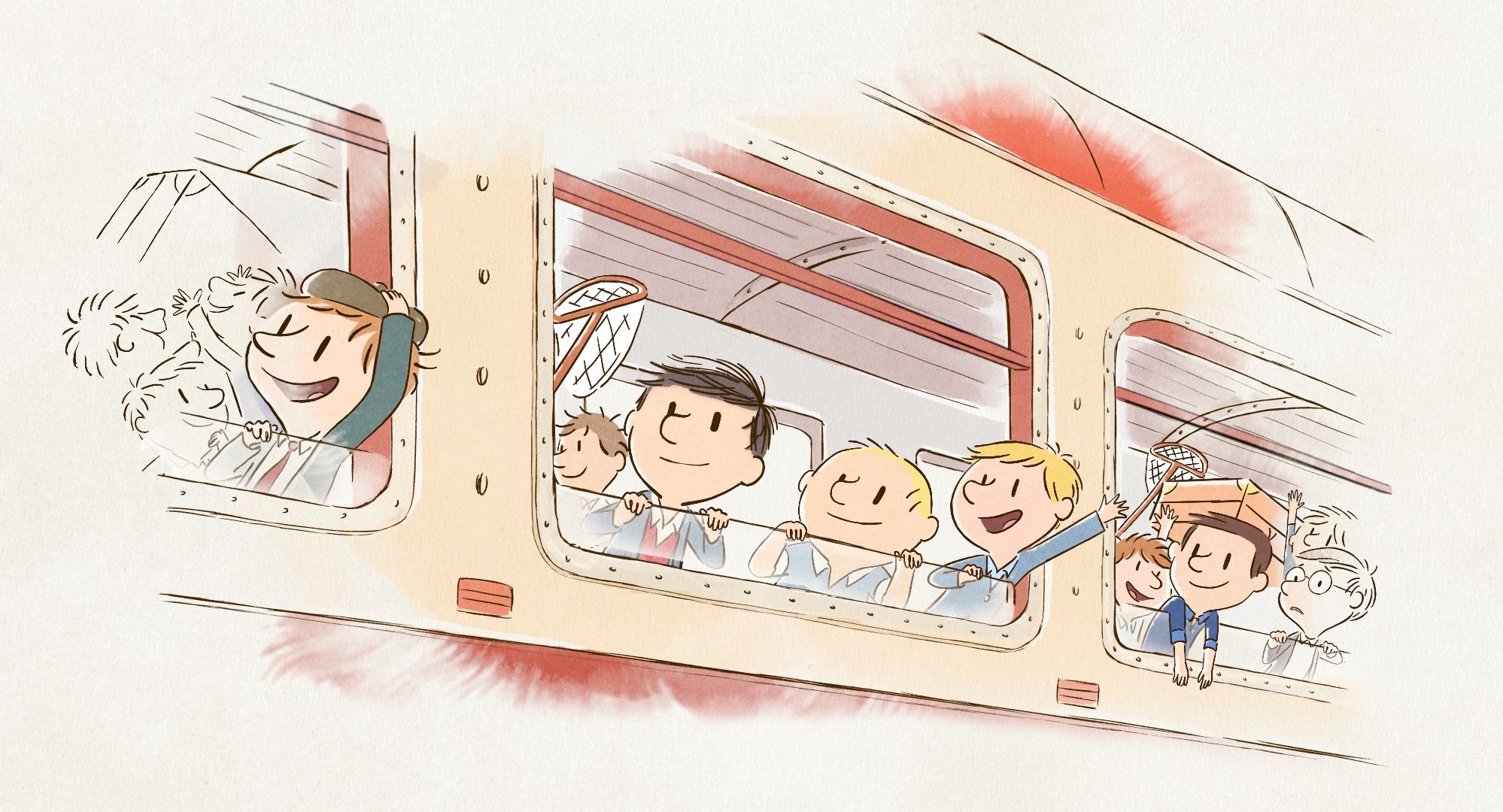 The ideal childhood everyone should have, in Little Nicholas / Photo courtesy of Buffalo 8

Popflick: You took some creative liberty in introducing a full spectrum of color. The drawings were black and white with just a little red accent. How was this change received?

Benjamin Massoubre: Actually, pretty well! We had a chance to work with Jean Jacques Sempé since the beginning of production. So we talked a lot about it with him, about the animation style, about putting Nicolas in colors. Actually, we went back and forth on the colors with Jean Jacques and rebuilt the entire universe. We stayed true to the black and white because you can see the colors seeping into the frame. Part of the poetry of Little Nicholas comes from its wide illustrative images. And we kept that in the movie because Nicolas is always really small in big, huge sets. We try as much as possible to stay true to Jacques' framing. He had the chance to watch the full movie before we went to Cannes in the early spring of 2002. He was really happy with what we did.

Sempé died a few months later, on August 11, at 89 years old. His spirit, and that of his friend Goscinny, lives on in Little Nicholas.