A documentary that explores our complex relationship with nature itself and our contradictory behavior of caging what we fear may be lost.

Meet Popflick, The Streamer That Cares

It is an understatement to say that the streaming market is overcrowded when more than two hundred services are vying for a piece of your entertainment budget and your attention. There is too much to see, too little time to see it, and an ever-shrinking entertainment budget to spend on subscriptions or downloads. In such a state of affairs, it might be counterintuitive to make a case for a new streaming service... but that is what I am doing here. Meet Popflick, the streaming service that houses this blog.

Trust me, I know your pain. I am an unabashed film buff who hungers for access to every movie ever made. If you are reading this, chances are you know the feeling. I feel like I am getting away with something when I catch a miraculously restored, old film. You were not supposed to watch this...and yet, you did. Most of the salary from my first job was spent on blank VHS videotapes to record rarities showing up on cable. Access is everything.

The brave new world of streaming seems like a dream come true. I have been able to keep my subscriptions contained at 6 services by sheer force of will. I am also an avid collector of physical media because I know that the promise of having everything available at the push of a button…well, it will never happen.

The sheer volume of stuff available creates the illusion that it is easier than ever to break into movies, but that is not the case. Big media gatekeepers are still there, even if their names have changed. Some of them have been bought and absorbed by others - like Disney, gobbling up 20th Century Fox. You would think the big pockets should make these companies bold, but the opposite seems true.

Take the case of the Amazon Prime Video Direct scheme. It allowed filmmakers to upload unsolicited films and have them immediately available for distribution on the platform, under a one-size-fits-all policy of splitting revenue from streaming, rentals, and sales 50-50 between streamer and content creators. It provided easy access to licensing, putting a massive user base within reach. Alas, it was too good to last. Amazon has been progressively cutting down its independent catalog since 2019. It seems to be casting off the true Indies. No official explanation has been put forward, but the change coincided with the push for a new original series based on The Lord of the Rings. This year, Aaron Sorkin’s Being the Ricardos, with Nicole Kidman and Javier Bardem playing Lucille Ball and Desi Arnaz, took three Academy Awards nominations. No shade to Nic and Javi, but this is classic Oscar-bait. It’s IP fodder. Even though it left the Dolby Theater empty-handed, it’s unlikely that Amazon will change course. A former maverick is now behaving like an old studio. 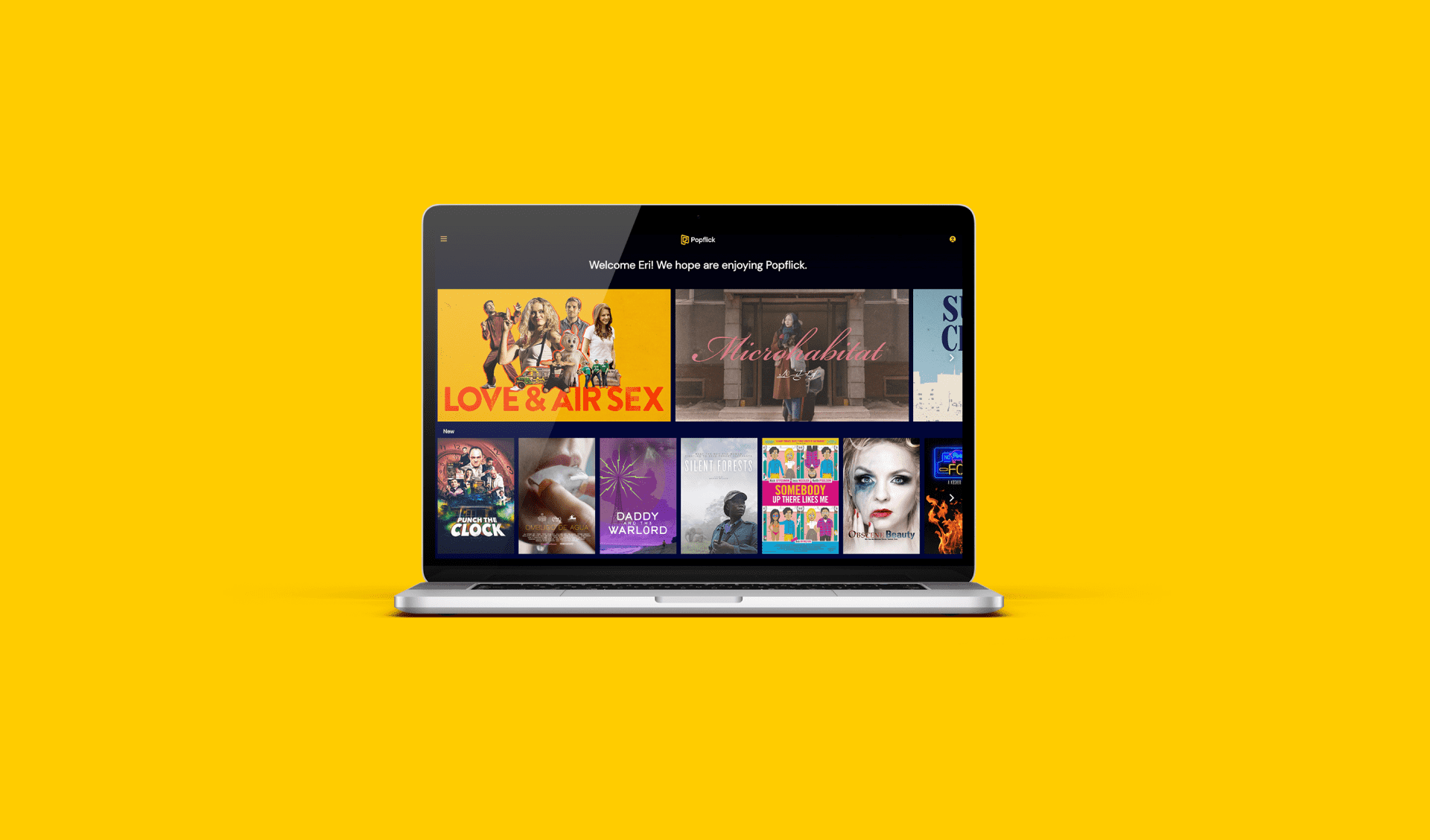 So, the usual suspects rise to the top. Landing pages have supplanted the theater marquee and the prime-time TV guide grid. You will have to submit your film to film festivals to catch the attention of distributors. That may take many months or even years. You can fight the good fight and self-distribute online, but it would be like dropping a drop of water into the ocean.

Popflick can be your new best friend. We are driven by artistic vision and not by the box office. If you have full rights to your movie or are capable of getting into a licensing agreement, you can submit a film for consideration. The process begins by filling out a simple form available on our website. Programmers see every submission and take into account entertainment and production values. Once they give the green light, Popflick contacts you to make arrangements on deliverables and set up a release date.

Popflick works for audiences and filmmakers alike. After covering payment processor fees, 50% of revenue generated by subscriptions is split among contributors, according to minutes watched by each subscriber. Payouts are calculated monthly, with payments performed by the 15th of the following month. This is no small thing, considering how the economics of streaming eviscerated the recording industry, virtually drying up the revenue stream of record sales. Amazon closed a door, and Popflick opened a window.

Now, for a welcomed twist: Popflick does not demand exclusivity. You can keep shopping around your movie, pitching it to other outlets, and submitting it to festivals, at least those that do not demand world premieres (make sure you read up their requirements, we do not want to cramp your style). We see this as a win-win situation. Check out our Frequently Asked Questions page for more information on the process.

All formats and cinematic mediums are welcome: short or feature-length films; live-action, or animation. dramas, comedies, suspense, horror, or whatever hybrid your creativity fancies. Popflick also accepts submissions from all over the world. We offer a friendly platform for foreign filmmakers aiming to enter the US market. Right now, you can sample movies from Korea, Germany, Portugal, and of course, the US. All of them, with English subtitles.

Our site is user-friendly and easy to navigate. Large thumbnails give way to a film-dedicated page with easy access to trailers. You can get a clearer idea of what the movie is about. You can find recognizable stars. Also, surprising work from indie darlings, like Waterlily Jaguar. The drama is actress Melora Walters’ directorial debut, produced by Paul Thomas Anderson, who memorably directed her in Magnolia. The movie stars Mira Sorvino and James Le Gros. If you are feeling adventurous, there are many shorts and features made by up-and-coming talent from all over the world - check out the short Ombligo de Agua by Nicaraguan filmmaker Laura Baumeister.

By connecting artists with audiences, and allowing filmmakers to monetize their work, we contribute to keeping cinema alive

Popflick serves filmmakers and viewers alike. Just as the major players close the gates to new talent, we are opening a path for independent filmmakers. You may think the world does not need a new streaming service, but the creative audiovisual ecosystem does need new ways to operate. By connecting artists with audiences, and allowing filmmakers to monetize their work, we contribute to keeping cinema alive. If new filmmakers can't earn a living doing what they love to do, they will turn to other avenues to earn a living  and we may never get to see the next Sex, Lies and Videotapes or The Blair Witch Project. With no new blood coming in, the art form will suffer. For a small monthly fee, you can fight the good fight...and watch some cool movies in the process.