Ain't she a doll?: M3gan shines at the box-office and social media with mad, murderous moves

By Juan Carlos Ampié01/12/2023
The yes have it: M3gan looks down on you, punny humans / Photo courtesy of Universal Pictures

When in doubt, you can bet horror will save theatrical exhibitions. The first big story of the year is how M3gan (Gerard Johnstone, 2023) turned the graveyard of January into a garden planted with trees that grow money. On the first movie-going weekend of the year, the movie cashed in a little over 30 million dollars at the domestic box office on its first release weekend. Factor in international ticket sales, and the bounty rises to $45 million. Bear in mind the reported budget is 12 million dollars, which means it recouped Blumhouse Pictures’ investment with lightning speed and started accruing nifty profits before the weekend was over.

Things begin abruptly with a garish parody of a TV commercial peddling Purrpetual Pets, a disturbingly ugly toy. You may think somebody messed up in the projection room, inserting one of those pre-show ads in the feature presentation. Except in the world of M3gan is not a parody at all, nor a mistake. It is a hard-sell advertisement for the very toy Cady (Violet McGraw) holds in her lap while riding in the backseat of her parent's SUV. The family dashes through a winter storm, off to a coveted sky vacation that will never come. In whiteout conditions, their vehicle gets totaled by a truck.

The promise of immortality in a toy takes sinister overtones as our little heroine becomes an orphan. Cady survives almost unscathed and goes to live with her aunt Gemma (Allison Williams). The young woman is a workaholic robotics engineer at a Seattle toy company and barely knows how to relate to a child. Combining work with family duty, she recruits the kid to do a real-life trial of her latest creation: M3gan.

It is not your mom’s Tamagotchi. The child-size doll (played by Amie Donald and voiced by Jenna Daniels) looks like a Stepford preteen, but it is a dramatic leap forward for artificial intelligence. The algorithm that controls her develops faster as she interacts with her imprinted human. Soon, M3gan becomes Cady’s best friend, protector, and the avenger. M3gan is not the kind of movie that thrives on surprises. On the contrary, you know what is coming and experience pleasure at seeing your worst - best? - fears coming true. 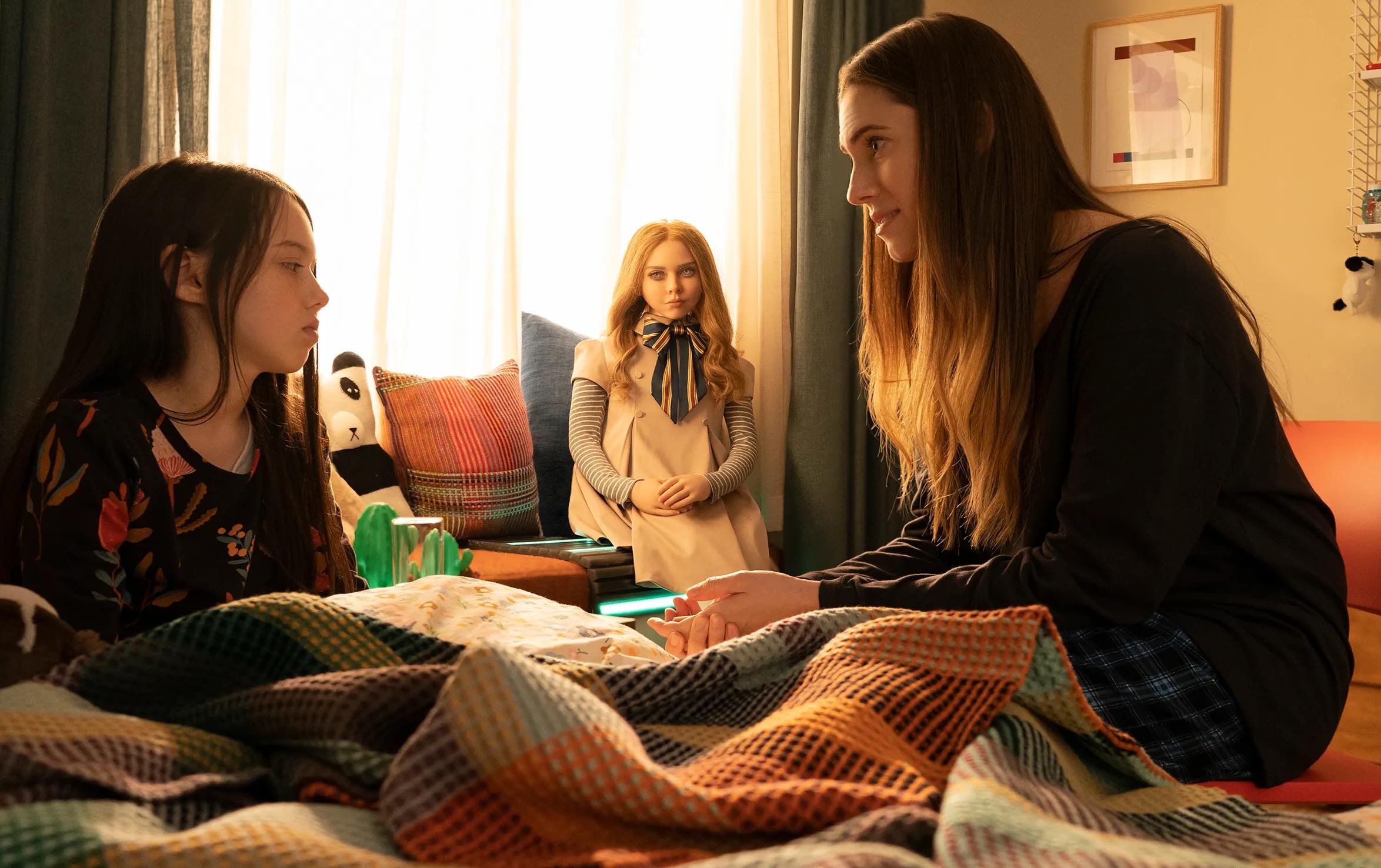 You can find the roots of M3gan in Frankenstein, or the Golem, if you want to go as far back as possible. She owes something to every movie with killer robots and murderous children, from The Bad Seed (Melvyn LeRoy, 1956) to Westworld, both on film (Michael Chrichton, 1973) and TV (Lisa Joy & Jonathan Nolan, 2016-2022), passing through cult classics like Who Can Kill a Child? (Narciso Ibáñez Serrador, 1976). The one thing that saves it from being derivative is the filmmakers' awareness of the humorous potential in the premise. That and the cross-pollination with social media marketing. The truer thrills of M3gan are in the selling.

By now, you have not seen “the M3gan dance” in countless viral videos and talk-show interviews. The studio even sent dancers dressed as dolls to perform in impromptu happenings in public spaces. The scene is the climax of the movie trailer, igniting the web in late 2022. The saturation could make you believe that M3gan is actually a dancing doll, but you would be wrong. Once you see the movie, you realize it is an odd moment. The scene takes barely a few seconds of screen time. It is funny and creepy, probably the scariest dance number on film since James Gumb (Ted Levine) serenaded Catherine Martin (Brooke Smith) by lip-synching Q’Lazzarus’ Fresh Horses in The Silence of the Lambs (Jonathan Damme, 1992).

A braver filmmaker would push this movie into being a full-blown musical. At some point, M3gan sings David Guetta and Sia’s Titanium.The scene works on two different levels. For the characters on the screen, it is a warm moment of identification. What can be more human than the emotion in a song? For the audience, it’s an ironic needle drop. But let’s go back to the dance, which is primal and aggressive. The action is the epitome of being extra. It is totally gratuitous. You could leave the shots on the cutting room floor, and the narrative would remain the same. M3gan thinks so little of David (Ronny Chieng), Gemma’s boss, that she will terrorize him with a shimmy before killing him. As disposable as the moment is, it is the most memorable thing about the movie, which seems retrofitted to support this bizarre image that lasts a few seconds.

The script by Akela Cooper, who worked in the delightful Malignant (James Wan, 2021), does aspire to consequence by invoking some heady themes. There is pathos in Cody’s grieving and Gemma’s incapacity to engage with the girl on an emotional level. When M3gan tries to drive a wedge between the humans, she proposes taking care of Cody so that Gemma can concentrate on her career. After all, she was not necessarily dreaming of raising a kid. Gemma is a working woman who needs to wake up and realize she needs family more than professional success.

With every movie they release, Blumhouse is burnishing a house style. Here, they cast Allison Williams in the lead role of Gemma. You may recall her as Daniel Kaluuya’s deceitful white girlfriend in Get Out! (Jordan Peele, 2017). Her blankness fitted the role. Here, she looks the part of a Millennial creative professional, but she can’t quite overcome a bland character. But then again, everything must be bland so that M3gan can shine. As her villainy manifests itself, she becomes the ultimate mean girl. The formal dress, white complexion, vacant blue eyes, and vaguely blond hair invoke an ideal of privilege.

That is why the dancing scene is so effective. It tarnishes this conservative fantasy of the perfect girl. Still, a mock commercial in the executive presentation promises models of every skin color. In late-stage capitalism, every ethnicity can be appropriated and sold. - this must be seen as progress. The other moment in which M3gan betrays her true nature shows her running on all fours in a forest chasing a hapless bully who made the mistake of messing with Cady. But then again, the perfect facade is part of her true nature. The doll is artificial perfection and savagery, tied up with a pretty bow.