The Phantom of the Monastery: a Mexican Horror Classic Gets New Life

We are on the final stretch of October. By now, you must have had your fill of horror. We got a new Hellraiser (David Bruckner, 2022) on Hulu, Criterion Channel curated an irresistible selection of 80s flicks, and in theaters, Halloween Ends(David Gordon Green, 2022) well, ended. I do not mean to put down Adam Sandler, but before you hit replay on a rewatch of Hubie Halloween (Steven Brill, 2021), I would like to propose an excursion abroad and to the past. Every horror fan must see The Phantom of the Monastery.

The Golden Age of Mexican Cinema was in full force when Fernando de Fuentes, one of its better directors, served this gothic chiller. It was one of three movies he released in 1934, including Godfather Mendoza, the middle entry in his monumental Mexican Revolution Trilogy - completed by Prisoner 13 (1933) and Let’s Go With Pancho Villa (1936). He was a prodigious, versatile filmmaker, at ease in every genre, from politically charged drama to musical comedy. His filmography includes Out in the Big Ranch (1936), forefather of the sub-genre of ranchera comedies. He remade it in 1939, with superstar Jorge Negrete in the role originated by Tito Guizar. 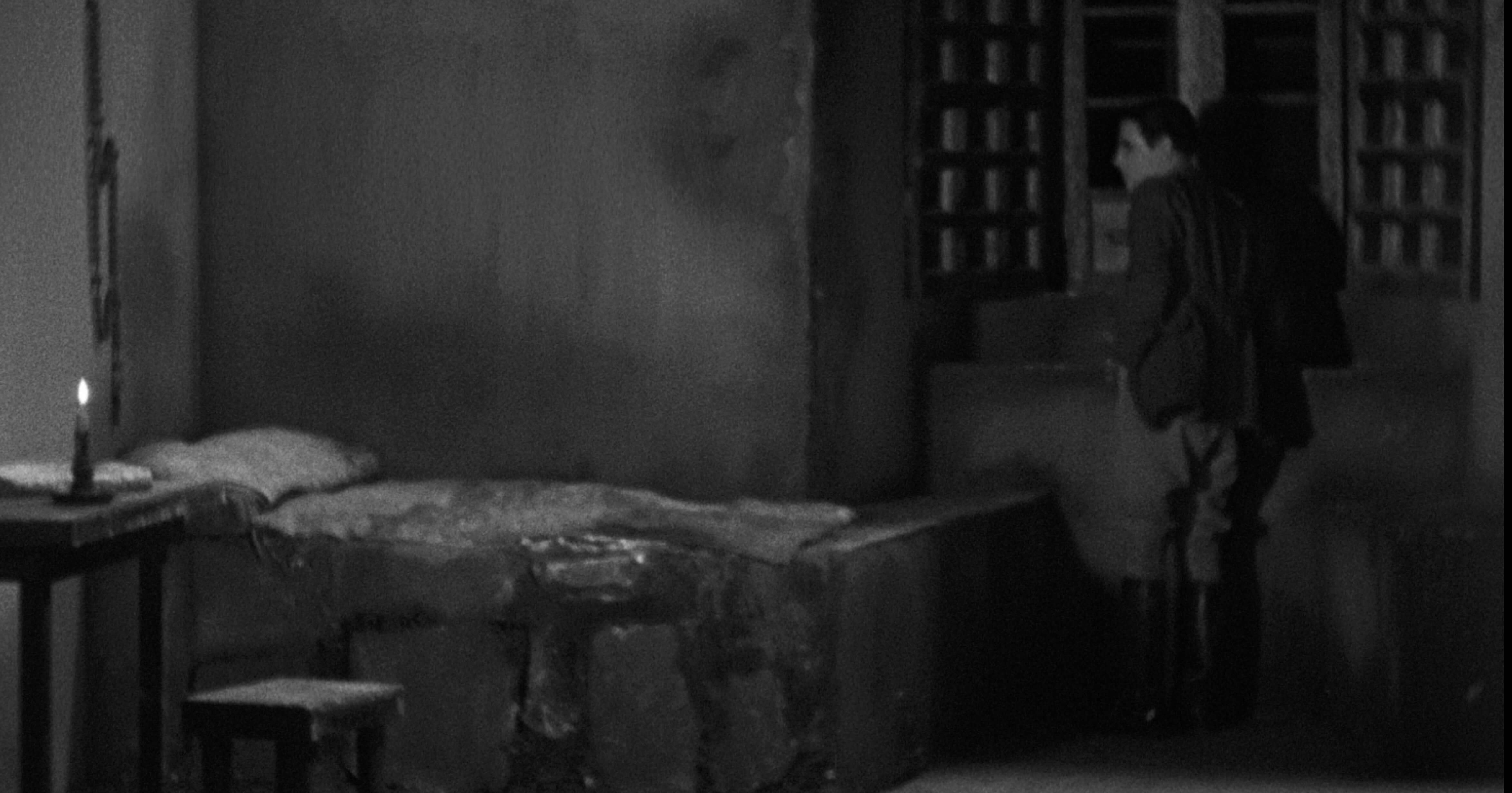 Enrique del Campo gets his own private cell in The Phantom of the Monastery - Credit: Powerhouse Films

As The Phantom of the Monastery starts, three townies get lost in the woods. Eduardo (Carlos Villatoro) and Cristina (Marta Roel) are married. Alfonso (Enrique del Campo) is their best friend, along for the ride. But the dynamics of the trio are askew. Eduardo is nebbish and whiny. Cristina is always physically closer to Alfonso. She even grabs his arm as if looking for protection. A mysterious blind man guided by a foreboding dog appears to take them to a nearby convent, so that they don’t spend the night at the mercy of the elements. The offer strikes them as odd. They think the place is derelict, but he does not seem to grant them the right to decline.

They are surprised to find an order of cloistered monks under a vow of silence at the monastery. A porter (Victorio Blanco) and the Father Prior (Paco Martínez) are the only ones allowed speak, but barely. Both men utter words in brusque, off-putting statements. Soon, eerie manifestations make them wish for the relative safety of the wild: shadows disconnected from any physical element appear, and laments emanate from a shutdown room. Extra tension comes from the frisson between the visitors, with their secular manners, and the hosts, living by customs from a different era. 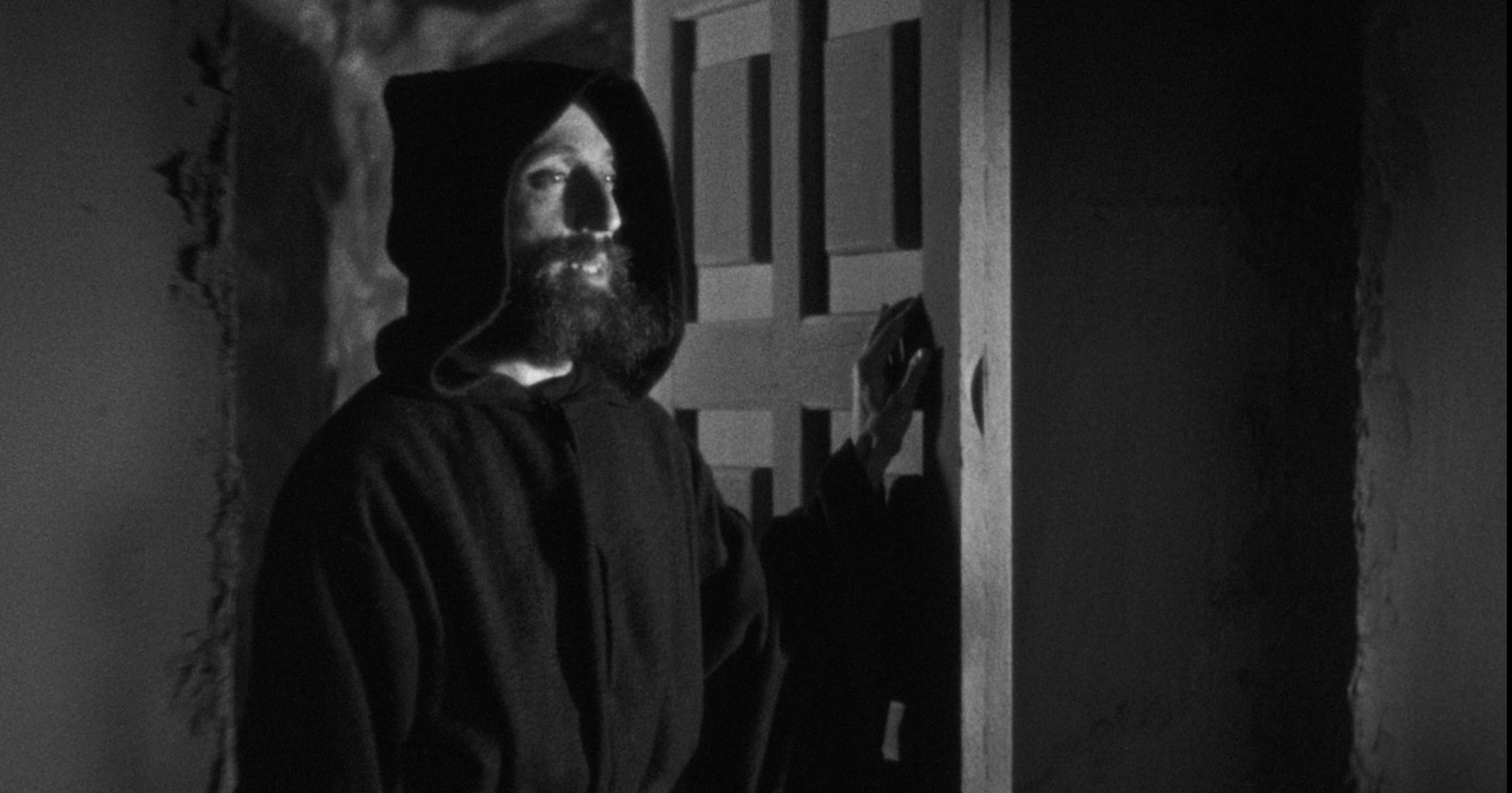 Victorio Blanco greets the inconvenient visitors in The Phantom of the Monastery - Credit: Powerhouse Films

An extended scene at a dining hall joins the plot strands: the phantom haunting the convent is the spirit of a deceased monk. Before taking vows, Brother Rodrigo coveted the wife of his best friend. He made a pact with the devil to get what he wished the most . The relationship of the three main characters mirrors the back story. Alfonso, Eduardo and Cristina get a chance to avert disaster or find eternal damnation. The plot becomes a moralist cautionary tale, but there is bawdiness in the visuals. Check out the camera movements registering the complicity between Cristina and Alfonso, right next to the husband. The thrilling shock of the forbidden transfigures into fear when moments later, they realize the food on the plates has turned to ashes. 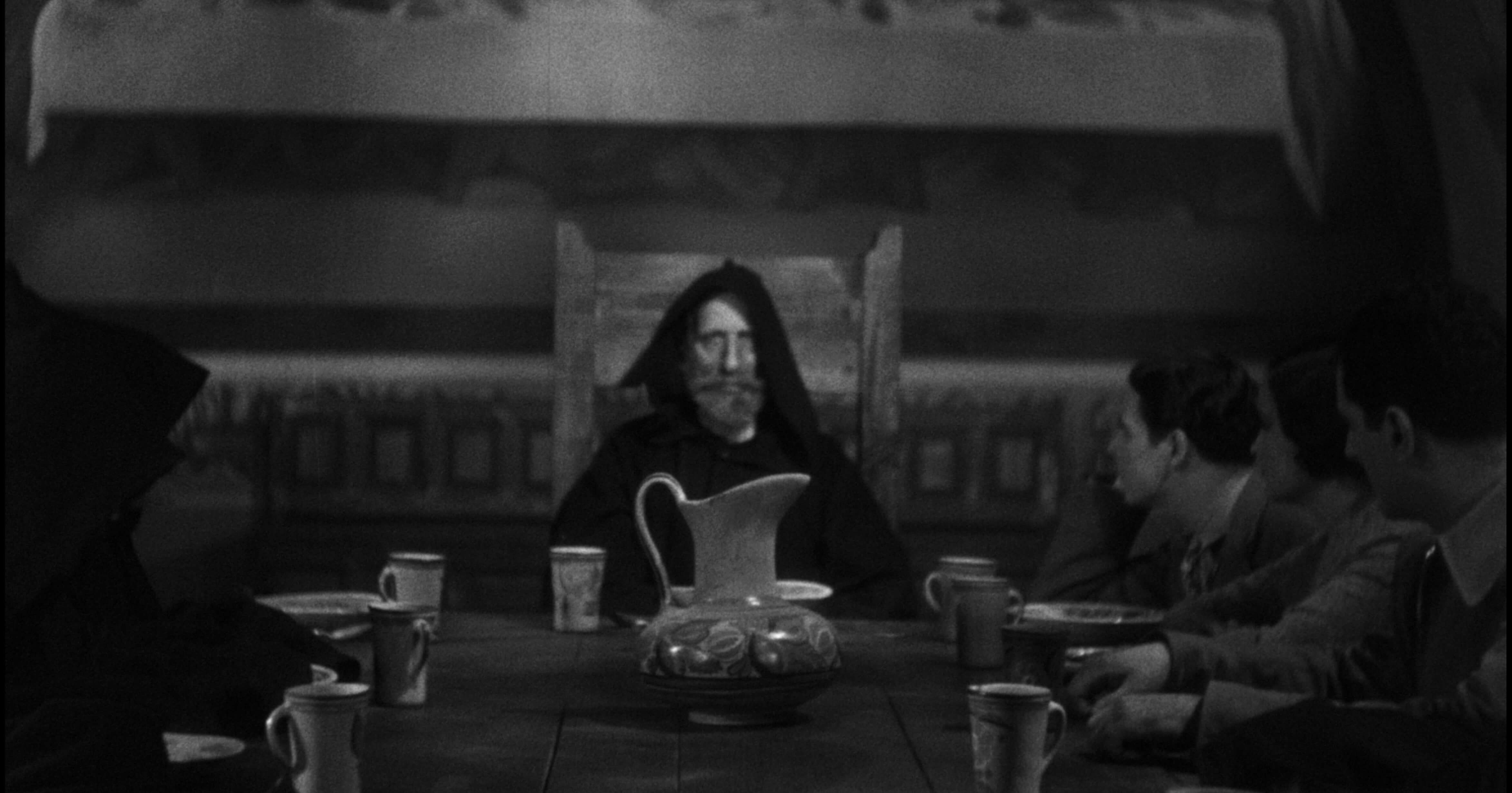 Paco Martínez heads the table in The Phantom of the Monastery -Credit: Powerhouse Films

The Phantom of the Monastery is a triumph of mise en scene and atmosphere. American cinematographer Ross Mitchell makes the most out of the location, an abandoned convent in Teotzotlan, near Mexico City. He started his career in the United States in 1918. By 1933, he had relocated to Mexico, where he kept working until the fifties. In his filmography, you will find One Mad Kiss/El Precio de un Beso (Marcel Silver, James Tingling, 1930). It is one of a handful of films produced simultaneously in English and Spanish versions - the much-lauded Spanish “Dracula” (George Melford,1931) belongs to the same group.

Part of the fun of discovering classic films such as this is to find echoes of modern movies. The conduit to communicate with the devil is a cursed book. In the scariest scene, Alfonso comes upon the corpse of Fray Rodrigo, who points him toward the tome. It is just like the replicating curse in recent examples of the horror genre, such as Ringu (Hideo Nakata, 1998) and its American remake, The Ring (Gore Verbinski, 2002), It Follows (David Robert Mitchell, 2014) and Smile (Parker Finn, 2022). Misery and eternal damnation love company. Part of me wishes someone like Guillermo del Toro does a remake, but the other part wishes fans of the genre would give a chance to this beautiful, scary classic in its original incarnation. 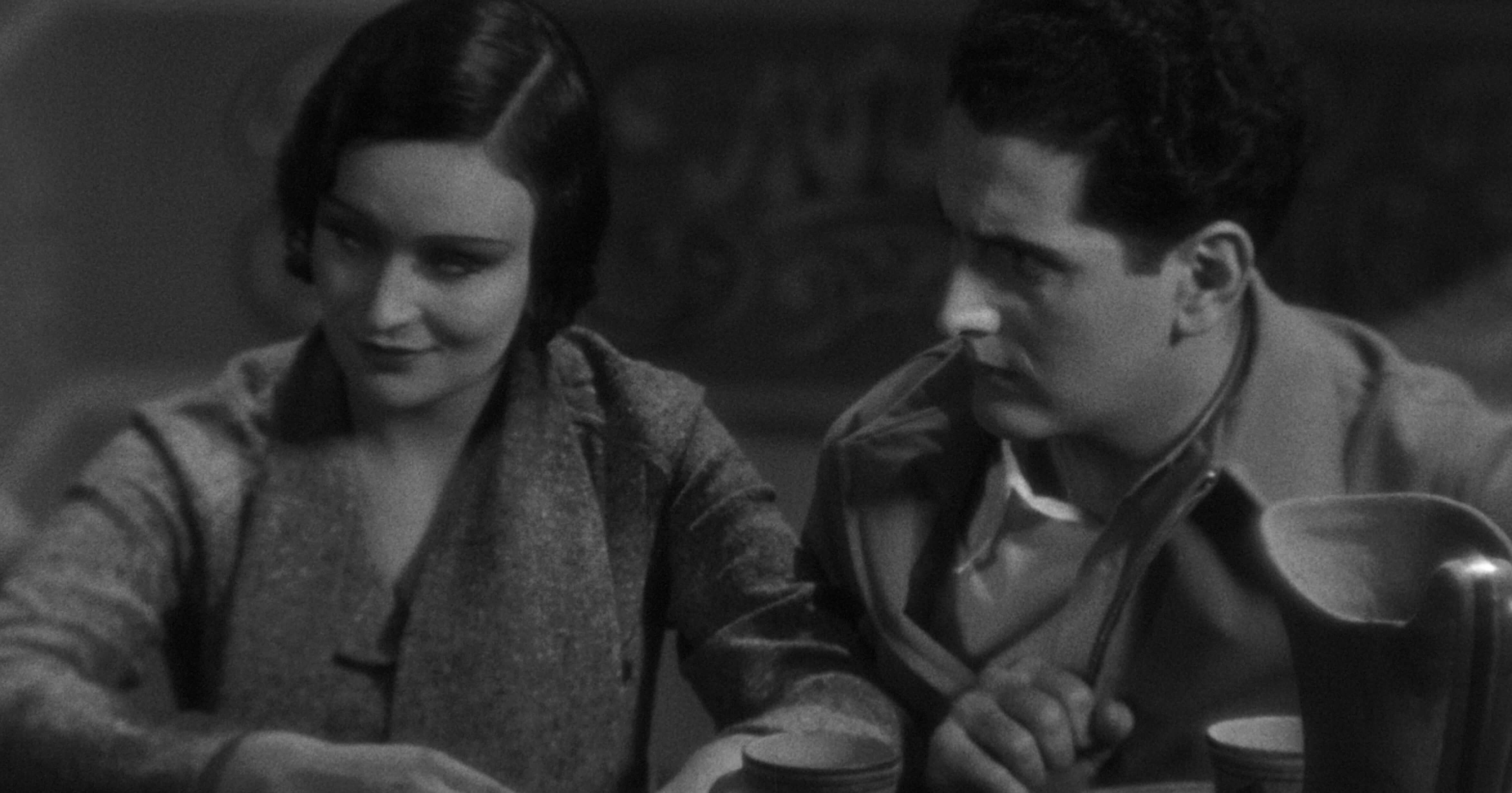 Horror is the perfect gateway to foreign and classic cinema. There is nothing more universal than fear. If you are not too keen on black & white movie with subtitles, or you have a budding cinephile in your mist, The Phantom of the Monastery is the perfect introduction. At least, for US-based audiences, it is easier than ever. The movie is available for streaming on The Criterion Channel. Indicator released a limited edition Blu-Ray. The stellar restoration was financed by The George Lucas Family Fund. It involved the UCLA Film and Television Archive, the Filmoteca de la Universidad Nacional Autónoma de Mexico, The Film Foundation World Cinema Project, and Permanencia Voluntaria Film Fundarchives.

Every cinephile knows about Martin Scorsese’s film preservation powerhouse, and how George Lucas invests some of that sweet Star Wars royalties in saving classic films, but it is heartening to see Permanencia Voluntaria making inroads. The organization leader is Viviana García-Besné, a filmmaker in her own right. Her family is deeply involved in the Mexican film industry since its beginning. At its most commercially successful moment, the Calderón family owned and operated a chain of 36 theaters all over Mexico. Their production company, Cinematográfica Calderón, produced more than 250 films over seven decades. García-Besné now works incessantly, saving and preserving a library comprised of neglected popular cinema: low-budget horror and sci-fi, rumbera musicals, and sex comedies. It’s the Mexican equivalent of a psychotronic mecca. Name any popular genre, they worked on it. These films kept the projectors running after the Golden Age when a perfect storm of Hollywood products and wilting government subsidies left Mexican cinema on life support. She retells the whole saga in vivid detail in her fascinating documentary Perdida (2010), a must for cinema lovers everywhere.