My Imaginary Country: Patricio Guzmán's Documentary on the Impossible Dream of a New Chile

The profound polarization in the US political sphere might be a new phenomenon for Americans, but it is pretty much par for the course all over the continent. At times, in Latin America, it reaches frightening, murderous extremes. The insularity of US media shileds audiences from this matter but if you want to get a crash course on how countries come undone and struggle to get back together, you can do a marathon on the works of Chilean filmmaker Patricio Guzmán. His latest documentary, My Imaginary Country, is making the rounds in the Art House circuit and soon will be available on VOD.

Guzmán graduated from the Official School of Cinematographic Art in Madrid, Spain, and eventually returned home. In 1973, president Salvador Allende succumbed to a violent military coup d’état. He died by suicide, besieged in his own office. General Augusto Pinochet took power in a terror campaign against dissidents. The National Commission for Truth and Reconciliation, documented at least 3,428 cases of forced disappearance, torture, and murder committed by the government between 1974 and 1977. Guzmán was imprisoned in the infamous Estadio Nacional, and subjected to mock executions and other episodes of torture. He survived and went into exile and produced La Batalla de Chile, a landmark of political cinema.

Pinochet remained in power until 1988, ousted by a peaceful referendum. The process is documented in the key of fiction No (Pablo Larraín, 2012), with Gael García Bernal playing the advertising executive behind the landmark campaign. In the meantime, Guzmán became a film festival fave, with a series of movies that grapple with memory, history, and the reality of Chile itselt. His recurrent subjectsa are Chilean politics, geography, the people and their traumas. His perspective is left-of-center, but no one could hold that against him. You can catch up with his most prominent films at Ovid.TV, including the monumental The Battle of Chile (1976-1979) and recent works like Nostalgia for the Light (2010), The Pearl Button (2015), and The Cordillera of Dreams (2019).

You don’t have to be a completist to latch on to the narrative pull of My Imaginary Country (2022), which premiered at the Cannes Film Festival. Guzmán is in the league of the old masters whose every new movie takes center stage at the most important festivals. For him, it is not a matter of whether he will be accepted but where he will decide to go.

The title itself speaks of an ideal place to be achieved through the push and pull of political maneuvering. Chile is a beacon of success and stability in contemporary Latinamerica. Yet, each country carries its load heavily. Pressure accumulates until enough people manifests their discomfort. Over and over again, those in power fail the test and respond violently.

In My Imaginary Country 2019, the issue at hand was an increase in the cost of public transportation. It was one of many points of contention: the decreased value of pensions, cuts in public education budgets, inflation. The issues accumulated. Thousands of students occuppied metro stations and city streets. Sebastian Piñera’s government responded with force. Protestors burned a subway car, and soldiers blinded 400 eyes with rubber bullets. It hardly seems a fair trade. 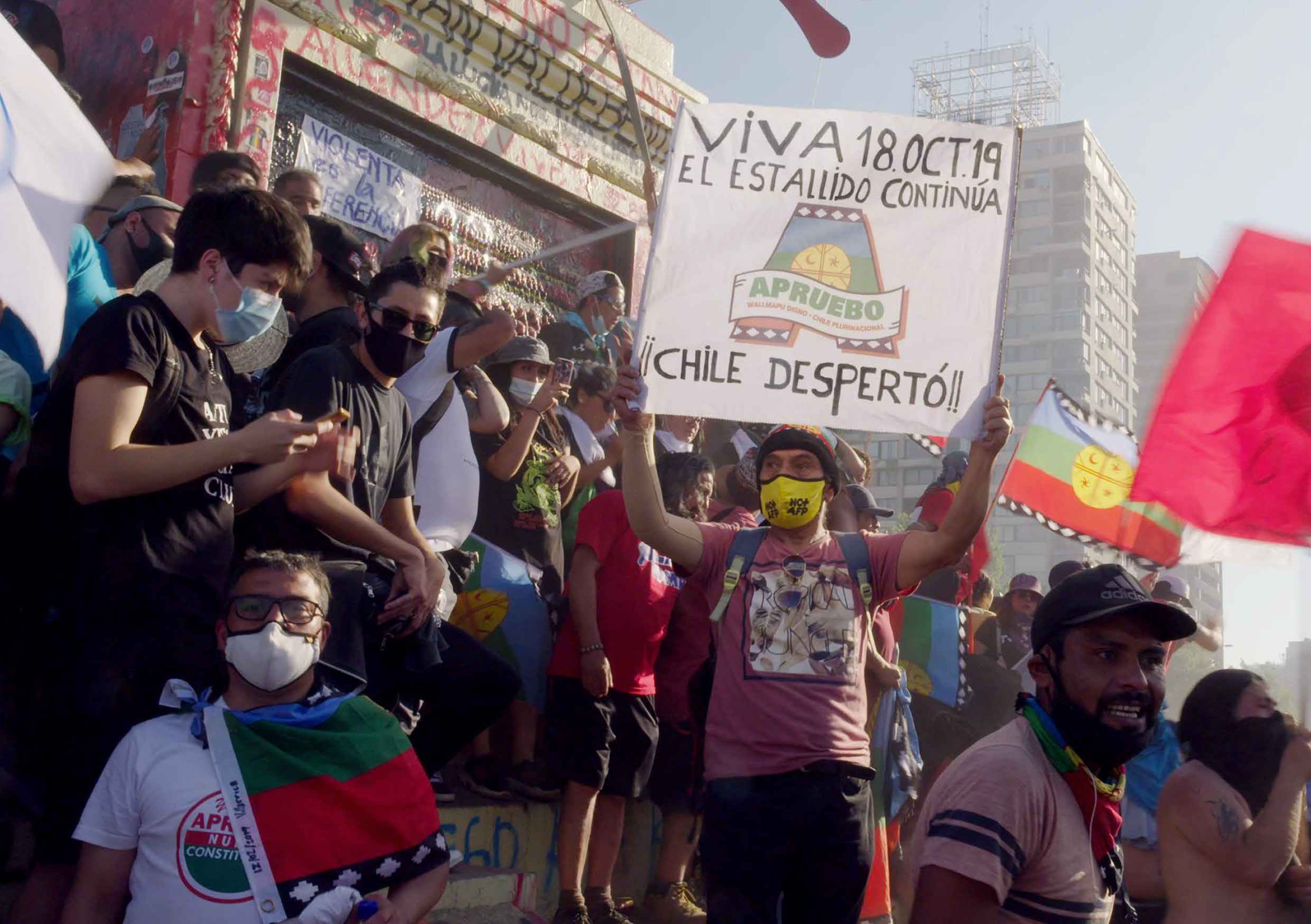 People take the streets at My Imaginary Country

Guzmán takes you to the Santiago streets with moody sequences filmed after upheaval and news archive, edited with pulse-pounding certitude. We never see his face, but his warm, measured voice guides you through his interpretation of the events. These agments alternate with interviews with people who lived through the protests. We meet a photographer who lost sight in one of her eyes, a voluntary paramedic risking her safety despite having a kid. Journalists and writers provide historical context and ponder possible outcomes of the crisis.

In time, the discourse latches on the Constitutional crisis. The current constitution dates to the Pinochet years. It is influenced by the neoliberal policies of the era, which go against the grain of socialist priorities. You may feel Guzmán is biased, but Documentary filmmakers are under no obligation to strive for balance. Even for journalists, balance is an illusion. Can you blame Guzmán for siding with the left when he suffered the worst at the hands of Pinochet?

The problem is that reality takes the air out of the movie in one swift gesture. On September 4, 2022, Chileans voted on a referendum for a new constitution, with a draft that would hew closer to the concerns of contemporary Chileans, answering the concerns of women, native peoples, LGBTQ groups, and many other groups. If you saw My Imaginary Country right before the election, you would think the calls for reform would prevail by a landslide. The discourse crafted by Guzmán and his subjects is that persuasive. The recent triumph of socialist Gabriel Boric in the presidential elections seemed to point in that direction.

Alas, you would be wrong. The majority of voters against the new draft. In one swift strike, the dream of a more progressive Chile took a backseat. The reality is much more complicated, and change, real change, comes by slower, if at all. The scope of My Imaginary Country shrinks right before your eyes. This is the truth of a segment of the population. Guzmán has no obligation to fit every political group in his movie, but one can't help to wish byt wish for a complete portrait of this particular historical moment.

Still, there is much to commend in My Imaginary Country. At one point, we get an interview with four members of Las Tesis, the feminist collective that earned worldwide fame thanks to A Rapist In your Path. The insidiously catchy protest chant/performance is a pointed critique against male power. All around the world, women made the performance their own to denounce gender-based violence. By then, the most significant gesture Guzmán makes becomes evident: all of his interviewees are women. The revolution will be feminist, or it will not be at all.