One of the biggest promises of the video era remains unfulfilled. And as streaming corners physical media into an ever-shrinking niche, it becomes clear that it will never turn into reality. I’m talking about owning the complete oeuvre of a film director. Granted, in the big scheme of things, this is a small problem - one that betrays its victims’ privilege. But bear with me. As a film critic and cinephile, I still stare wistfully at my incomplete boxsets and ponder the eternal what if. What if I had every film made by this filmmaker I love?

The complete filmography of an artist is very rarely theirs to trade.  Usually, the rights are divided or shared between studios, private companies, and overzealous heirs. Any home video distributor would have to juggle many parties to get everybody - and every title - on board.

As I write this, I steal glances at my most cherished possession, a complete set of the films of Eric Rohmer, edited by France’s Potemkine. It cost way too much money, but for me, it’s worth every penny. I even had to make the jump and buy a multi-region blu ray player to play it - exhibit A when you look for cinephile credibility. Go for someone like Buñuel, who worked in many different countries, and the problems grow exponentially.

The near-complete box set might be the bane of our existence, but it’s as good as it gets. And sometimes, you can jump through hoops and spend (maybe way too much) to complete your collection. Take the example of The Criterion Collection’s Essential Fellini box. It’s “Essential” and not “Complete” because it comes with 14 movies from the Italian maestro. The titles missing are six full features and three anthology movies. It might set you back a few bucks if you want the full Fellini. But you can always get the set during the Barnes & Noble 50% off Criterion sale and spend those savings buying the outliers.

Here’s the lowdown on what is MIA on the Criterion set:

L’Amore in Citta (1953): a classic example of the portmanteau film, with six shorts threaded together by the idea of looking for love in Rome. Fellini’s contribution deals with the coming and goings at a marriage agency. Michaelangelo Antonioni, Alberto Latuada, and Dino Riso also take turns behind the camera, making this curio a must-get. Raro Video’s Blu Ray edition goes for $17.99 at Amazon. God knows it must look better than the region-1 DVD I got ages ago.

Boccacio ’70 (1962): ribald stories from Bocaccio’s Decameron get updated for the 60s. Fellini, working in color for the first time, delivers The Temptation of Doctor Antonio. It’s a nifty satire about a smarmy prude campaigning against a suggestive roadside billboard of Anita Eckberg promoting milk. Two years after “La Dolce Vita '' made her a household name, the actress is game playing out on her notoriety, allowing Fellini to make fun of the world’s fascination with his star. The other two stories come from Vittorio de Sica, and Luccino Visconti. The Blu Ray edition is available from Kino Lorber. 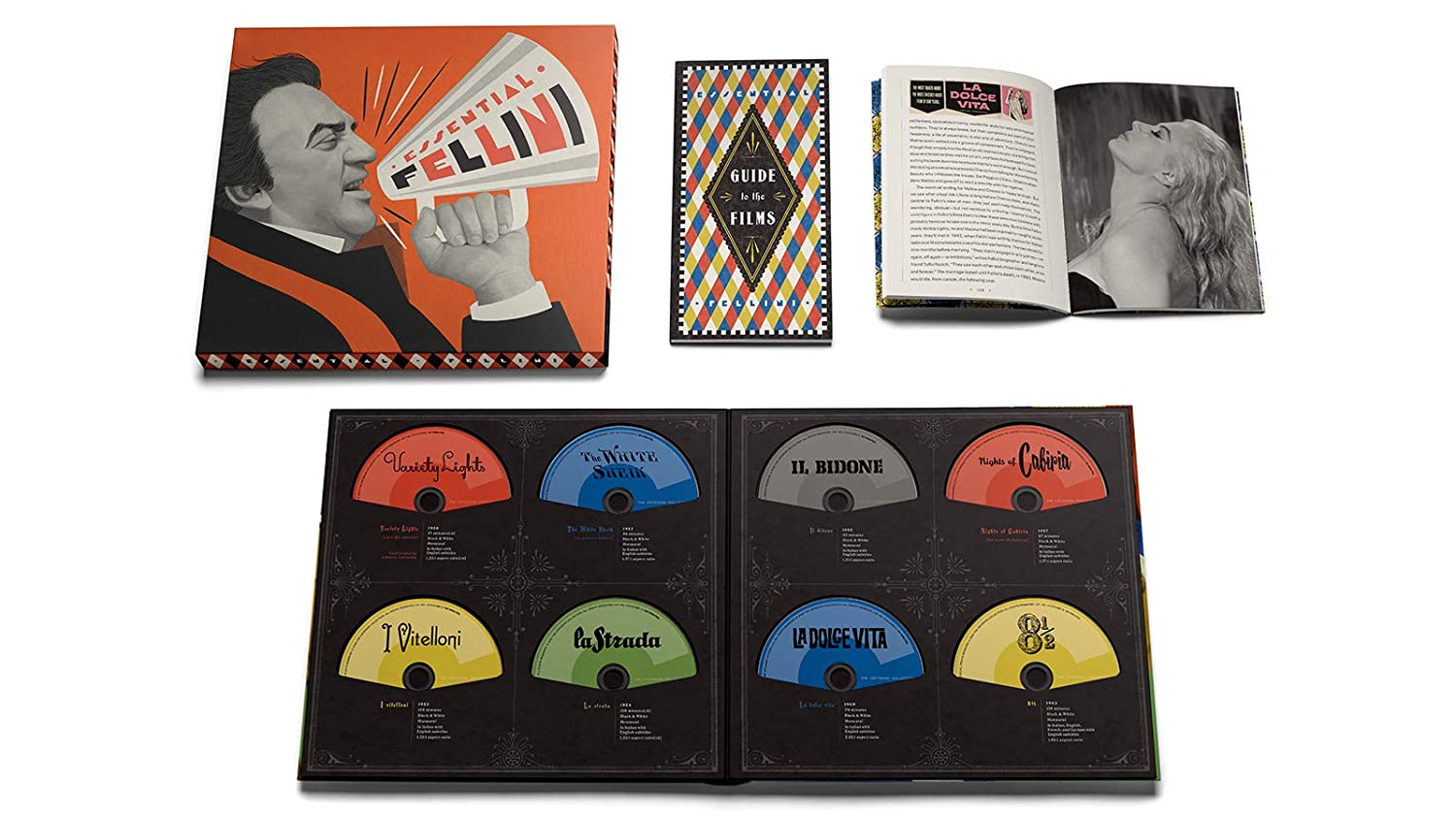 Spirit of the Dead (1968): the sinister undercurrents of Fellini’s world come to the surface in this omnibus of shorts based on stories from Edgar Allan Poe. Terence Stamp is a dissolute film star, going fast to an appointment with fatality in a shiny convertible. The short is currently playing on the Criterion Channel. Still, there are plenty of reasons to get the complete movie: Jane and Peter Fonda cavort in pseudo incestuous shenanigans, and for an extra dose of uncomfortableness, the director is her then-husband Roger Vadim. In Louis Malle’s contribution, Alain Delon plays a soldier in the Napoleonic wars, haunted by a doppelgänger. A relatively cheap blu-ray import from Spain is available at Walmart, but I can't vouch for its quality. Arrow Films put out a fantastic region A edition in 2010, now out of print. Resellers on Amazon are asking for over 200 bucks for it.

The Clowns (1970): a fascinating film produced originally for Italian TV. Capitalizing on his fascination with the circus, Fellini explores the history of European clown history and culture. The movie is a heady mix of fiction, documentary, and studio craft. The maestro himself appears on camera, directing a documentary crew. He confesses they are a bunch of actors pretending to film a documentary. The whole thing is so meta so meta your head will spin, leaving you disarmed at the power of its poignant conclusion. Raro Video includes his short from “L'Amore in Citta” as an extra.

Fellini’s Casanova (1976): Donald Sutherland spiced up his impressive 70s run with two notorious excursions into Italian cinema. After appearing in Bernardo Bertolucci’s “1900”, he took on the cape of the greatest lover in the world. Kino Lorber offers a reasonably priced disc that includes a booklet essay by film scholar Alberto Zambenedetti; and an audio commentary from Nick Pinkerton.

Orchestra Rehearsal (1980): broadcasters everywhere should do what Radio Television Italiana did and send blank checks to genius filmmakers. In this charming and ultimately devastating allegory about social dynamics and the agony of living as an artist, a documentary crew films an eventful rehearsal, with the musicians virtually locked in an ancient church. A tyrannical conductor, an obstructive union agent, and self-important artists descend into upheaval as time passes. Their follies are recognizable, and the fleeting moment of grace they achieve feels earned. The lovely Arrow release uses a cool vintage poster for the cover.

City of Women (1980): Marcelo Mastroianni plays a charming lothario falling for an alluring stranger he meets on a train. He follows her to an isolated mountain hotel where a rambunctious feminist convention is taking place, and that’s just the first stop in a dreamy/nightmarish trip through which the director and his alter ego, try to make sense of how women’s lib changes the balance of power in sexual relationships. Cohen Film Collection offers a handsome transfer, which shines especially in night scenes. Enjoy the dark joyride featuring menacing teenagers, that drives home the similarities between Fellini and David Lynch.

Ginger and Fred (1986): we have come to the Rubicon of the set. This bittersweet comedy about a veteran couple of vaudeville dancers reuniting for a TV gig is not available in Blue Ray. You may, however, get a second-hand DVD, if you really want to complete your set with physical copies. A digital version is available on Amazon Prime, for rent or sale. Here’s hoping a label gets the rights sometime soon.

The Voice of the Moon (1990): the maestro’s swan song features a pre-“Life is Beautiful'' Roberto Benigni, as a mental patient pining for his ideal woman through a picaresque adventure through the countryside of Emilia-Romagna, the region that saw the young Federico become a man. The market is cruel with the old masters, and the movie was not picked up for distribution in the US. Arrow Academy vindicates this lapse in judgment with a special edition, including a DVD and a Blu Ray version.

And now that we have all the discs (except for Ginger & Fred, damn it!), where do we put them? The Criterion Collection box set is so beautiful, you kind of wish they would’ve included extra pages with slots to save the discs they could not provide. Alas, we will never see competing labels cooperating to accommodate the whims of collectors to that extent. Such is the lot of the neurotic cinephile. Put the cases on a bookshelf near the boxset and call it a day. Just be glad we can possess almost all the movies of the ringmaster of Italian cinema.