Old from M. Night Shyamalan and Its Lessons on How to Start and End a Story

Old is M. Night Shyamalan’s latest movie, but the first iteration of the story it tells was a graphic novel. French writer Pierre Oscar Lévy and Swiss illustrator Frederik Peeters published the graphic novel titled Sand Castle, in France in 2010. In a different world, you would get a tie-in edition for an American audience. But the graphic novel is too prickly and dark for mass audiences. If you want to go to the source, you’ll have to shell out for an imported hardcover. At least it’s a handsome edition. The differences between the source and the adaptation can be very illustrative of different approaches to storytelling, which might serve you well in your scriptwriting.

The basic premise is the same: a group of strangers coincides on a secluded beach and inexplicably begins to age at an accelerated pace. Small children hit puberty, and the chronic illnesses of adults have their way with them in a matter of hours. The situation is scary and poignant,  but it also holds the potential for suspense. Why is this happening? Is there anybody behind the phenomenon? Can they revert its effects? Survive? It’s easy to see why Shyamalan would go for it.

The narrative crux lies in the possibility of answering those questions or leaving them in the air. The graphic novel embraces uncertainty and offers no explanations. In one episode, a man trying to flee dodges sniper fire, but we never see who is shooting, and whose bidding they are doing. Lévy pushes forward the allegorical heft of the premise, letting his character embrace the fleetingness of existence, making peace with their accelerated mortality or succumbing to despair. No explanations are needed. The stark black & white illustrations bring to memory Holes, by Charles Burns, another graphic novel featuring symbolic physical decay.

Shyamalan works within the creative frame of commercial cinema and must provide answers to these questions. He also supplies a narrative frame to support the premise. It’s not enough to zero in on a casual group of strangers getting together by chance on a whatever beach. The characters in Old are visiting a luxurious tropical resort. They bring extra drama with their baggage. The protagonists are  Guy (Gael Garcia Bernal) and Prisca (Vicky Krieps) a couple in the throes of marital strife. Ready to call it quits, they carry on for a bit more, invested in giving the kids one last vacation as a family. You could do a movie with that setup, and the actual plot is yet to come.

The box-office success of The Sixth Sense (1999) pushed Shyamalan to fashion himself into a sort of Alfred Hitchcock for the XXI century. He played the part to a hilt, favoring the suspense genre. He also followed Hitch’s steps by inserting himself in his movies through cameos and small speaking parts. The amused detachment is supplanted by earnestness, a certain eagerness to please that is anathema to Hitchcock. There is nothing further from his icy dry British wit than this. A better actor would have added something to the scene. Shyamalan only calls attention to himself. 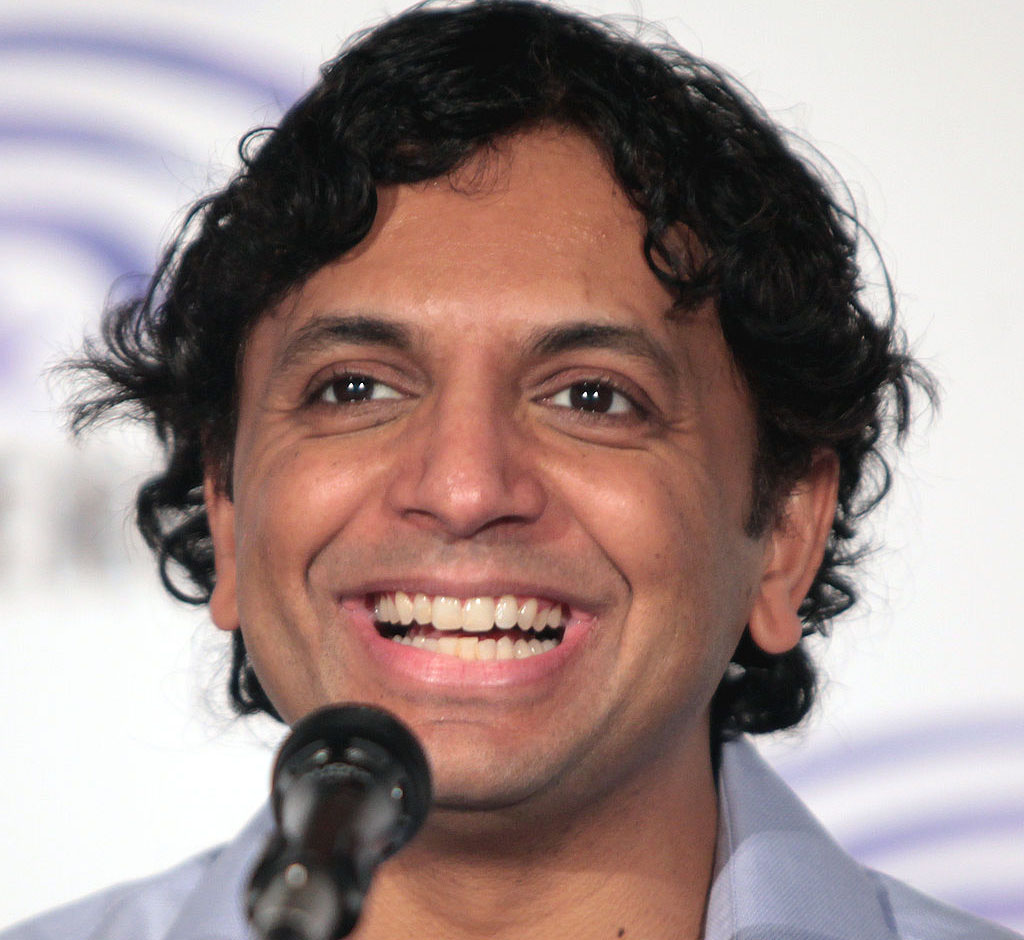 In Old, Shyamalan gives himself a small role as the resort employee that drives the unsuspecting party to the rocky cliff that encloses the beach, leaving a single path to enter or leave. By taking the role, Shyamalan plays on his image of him as a mischievous mastermind of mayhem. Of course, he is somewhat responsible for this. He made the damned movie!

Still, it is hard to resent him for his enthusiasm. The screening I attended began with a personal announcement from him, thanking the audience for returning to theatres after the pandemic shut down. Old, as a film, is a reflection of the coronavirus age. And not only because it deals with the hysteria provoked by a deadly, unseen enemy capable of killing you. Most of the movie was shot in a single location, with a small group of actors confined to the same space. In a way, it’s like HBOMax’s wildly successful series The White Lotus (Mike White, 2021), holding up the cast and crew in a resort that serves as location.

It brings to mind a basic tenement for young filmmakers eager to jumpstart their career: take a gander at resources available, and write something that fits. You can do magic with a limited number of actors in a single location. Heck, you can even give yourself a role, if you feel up to it. That’s one less actor to hire and pay! However, you will likely have your hands full, trying to get things done in that grey zone where producing and directing duties collide. Think very hard if it’s worth it to add to your plate the chore of crafting a performance in front of the camera.

Aiming to please the widest audience possible, Shyamalan abides by the demand of offering explanations.

Back to Old...as a storyteller working in the commercial realm, aiming to please the widest audience possible, Shyamalan abides by the demand of offering explanations. Even from the first scenes, hints are pointing to larger forces at play. Check out the moment when the resort administrator offers Guy and Prisca the excursion to the beach. Shyamalan’s scene piles up on the foresight, making a fuss about the amount of food included in the picnic provided to the travelers.

The basic situation of having strangers coming up together facilitates the acceptance of declarative dialogue that would sound rote in different circumstances. Most of the characters have some connection to the medical profession, and you know this early on when they introduce themselves or react to escalating emergencies: “I’m a doctor!”, “I’m a nurse!”, “I’m a psychologist”. Of course, you are, and subtlety doesn’t matter in this context.

A moment that hints at what could’ve been, Patricia (Nikki Amuka-Bird), the psychologist, ponders if they are  experiencing a collective psychosis, convincing them they can't leave even though no real physical obstacle prevents them. This is the plot of The Exterminating Angel (1962). In Luis Buñuel’s savage satire on bourgeois complacency, the surrealist master never explains anything, and just keeps the mystery going in a different location.

Buñuel and the authors of Sand Castle take the path of uncertainty. But Shyamalan is not interested in it, or he can’t afford to be. He must explain what’s going on. He clarifies the reason behind the protagonist’s predicament and who, ultimately, is guilty of their suffering. He even goes as far as providing some measure of retribution.  The audience can go back home, safe in the knowledge that there is justice to be had.

This level of closure is expected in popular cinema. I’m not saying it’s good or bad. It’s just a narrative convention, on par with the need for audiences to find someone to relate to in any cast of characters. The bigger the economic ambitions of the project, the clearer this process of identification has to be, unencumbered by subtleties of human nature. Of course, what the audience is looking for is fictional characters that reflect an ideal self. At worst, a hero is a person whose foibles can be overcome or corrected throughout the narrative.

Old is not better or worse for going down this road. It just responds to the imagined needs of its projected audience. There is a coincidence between the creative whims of his author and the expectations of the market. You can seek this out or move in the opposite direction. When you sit down to write, think of what you hope to achieve with your script. Think in which corner of the business you see it thriving. As a creative exercise, you can write different versions, with different narrative dynamics and outcomes.

In a way, we are hopeless in the face of our talent. We do what we can with what we have. You stare at a blank screen and then, an idea materializes itself. It comes out of a combination of inspiration and experience. Use some measure of discipline to put it in writing. And once you have it there, down in words, play around with it. If there is a lesson to be gained by comparing Sand Castle and Old, it is how many different shapes a story can take.