Democracy is fine and dandy, but if you look at upcoming movies and the menu on your streaming services, you would think that citizens ache to curtsy in front of a monarch. We seem to be obsessed with royals and their shenanigans. Enter Elizabeth, Empress Consort of Austria, and Queen Consort of Hungary is having a moment. The title is a mouthful, so we will stick to her nickname, Sissi. Vicky Krieps, the little-known actress who rose to notoriety by going head to head against Daniel Day-Lewis as feisty model Alma in Phantom Thread (Paul Thomas Anderson, 2017), plays Sissi in the revisionist drama Corsage (Marie Kreutzer, 2022).

We meet Sissi as she faces her fortieth birthday. By the XVIII Century, she was in the twilight of her life. “Women’s life expectancy is 50 years”, says informatively the doctor who tends to her ailments. After 25 years of marriage, she has grown distant from Emperor Franz Josef (Florian Teitchmeister). The royal protocol is as stifling as ever. She resents getting trapped in protocol duties, and is too intelligent to find fulfillment in a decorative role. She fills her abundant free time practicing sports and obsessing over her weight. We get many scenes of her getting fit in a corset, which seems to get tighter as the movie progresses.

Corsage follows Sissi over an eventful year. Kreutzer also wrote the script, and she plays fast and loose with historical facts to create a heroine that will resonate with modern audiences. The governing idea is that the willful empress is a woman ahead of her time. Material and behavioral anachronisms support this idea. Her carriage awaits a crossroads behind a gasoline-motor tractor, her training room has security metal doors, and a plastic mop and tub is visible in a corridor leading to her rooms. Miffed at an official dinner, she gives the finger to the revelers, as she leaves the stately salon. 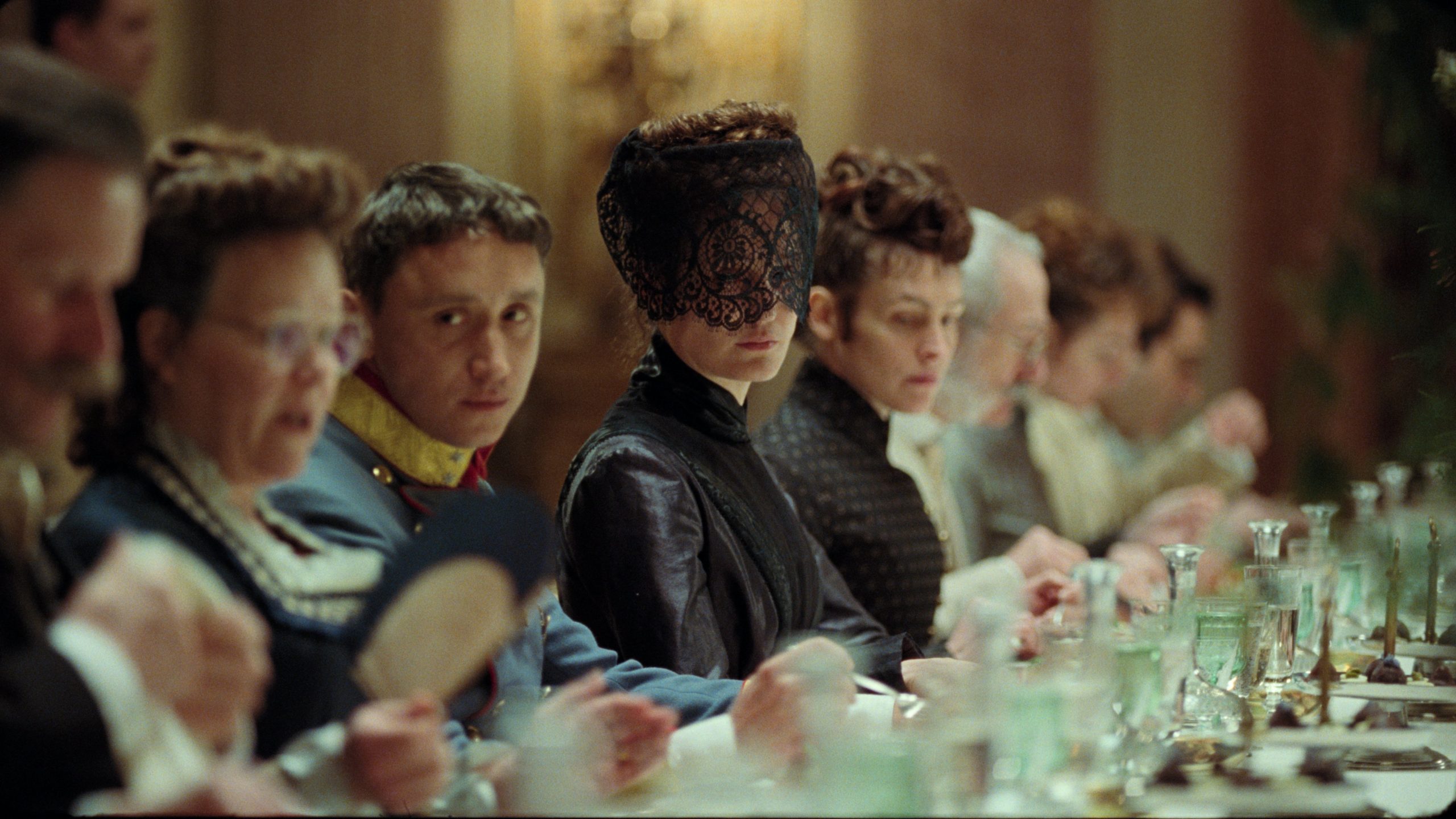 A banquet fit for a queen in Corsage / Photo: IFC FILMS - MK2

With modern pop songs blasting on the soundtrack, one cannot help to remember Marie Antoinette (Sofia Coppola, 2006). Coppola’s misunderstood masterpiece showed Kirsten Dunst wearing Chuck Taylors and dancing to New Age hits, reminding us that the maligned queen was just a teenager. The trick is affecting, but it would be mistaken to credit her with it. Off the top of my head, I remember seeing something similar in Walker (Alex Cox, 1987). Cox had the soldier of fortune reading Time Magazine and riding helicopters to establish a connection between the 19th Century mercenary with Reagan-era politics.

Back in Corsage, Kreutzer goes further with production design. The palace and elegant houses where Sissi lives or visits are dingy and run down. The walls have cracks, and the paint is peeling. This system that oppresses her is a ruin. It is a simple idea, nicely executed, but the one thing that pushes the movie to another level is the beautifully layered performance by Krieps. Willful and exasperating, she sends an electric charge to every scene. Her presence, not a modern telephone incongruously installed in a wall, convinces you that she is a refugee from the now, a sort of time traveler stifling under the social conventions of the past.

Kreutzer takes major liberties regarding historical fact, but there’s poetry in the final stretch. The embattled empress settles her affairs and embarks on a journey with no return, surrounded by an entourage of ladies-in-waiting who have come to resemble her. Her final denouement is pure invention but thematically fit. Corsage gives us a premature feminist in full view in one of the promotional posters. The first one is minimalist and evocative. The evocative illustration shows her dressed in mournful black, with the crown floating phantasmagorically over her head. When the promotional blitz hit the US makers, it was switched to a one-sheet emulating the cover of a fashion magazine. In a defiant glam portrait, she gives the finger to the patriarchy, with critical praise spread around like article titles. It tracks, considering Sissi’s concerns about physical image and weight, but the you-go-girl vibe is somewhat misleading, considering the mournful tone of the movie.

For all her troubles, Krieps was awarded the Best Performance Price at the Un Certain Regard side competition in the Cannes Film Festival - shared with Adam Bessa, for Harka (Lofty Nathan, 2022). Bear in mind this is not the Best Actress award extended to Iranian thespian Zar Amir-Ebrahimi for Holy Spider (Ali Abbasi, 2022). Still, Krieps is just starting an eventful journey through awards season, which might as well turn her into an Oscar winner.

The Sissi racket is overcrowded. Krieps cornered prestige cinema with her rendition. If you want something lighter, you might want to try one of many Germany-produced products. There is a mini-series, Sisi (2012). The musical Elisabeth got a live TV broadcast earlier this year. Netflix is streaming The Empress, a German 6-episode series covering her arrival at court.

If you want more Sissi, I would suggest going to the past. The Criterion Channel programmed a collection of 10 films starring Romy Schneider, including Sissi (Ernst Marischka, 1955), her breakthrough movie. The romantic drama was wildly successful and led to two sequels, Sissi, The Young Empress (1956) and Sissi, The Fateful Years of An Empress (1957), also directed by Marischka. Karlheinz Böhm plays Franz Josef in full puppy-dog mode. I shudder to think about the Sissi fans who went, just a few years later, to see their sweet emperor in Peeping Tom (Michael Powell, 1960).

The role catapulted Schneider’s international career, but she grew to detest the association with the character. Criterion offers a beautiful restoration distributed by Film Movement on physical media. The movie itself is maudlin and lumpy. It feels like one of those projects Disney produced to appeal to families. You half expect Tommy Kirk to show up as a wacky best friend. It is worth a look as a nostalgic artifact. The warm tones of Agfa film are a thing of beauty, and Schneider makes a beguiling spectacle of innocence.

Still, it makes for a perverse double bill. First, you get Sissi as a dewy teenage heroine and then, you get the disenchanted mature woman. Unhappy, but wiser. Schneider and Krieps come from different times, different places, and even different planets, but there is a place for both in our imagination. Real-life people, royals or plebeians, dead or alive, get sucked in by our imagination. Art based on real life enjoys an extra selling point. History comes with a halo effect. These movies, series and soap operas are not just entertainment. It is important!