All That Glitters Dances in Calendar Girls: Swedish Filmmaking Couple Tells a Most American Story

Swedish filmmakers Maria Loohufvud and Love Martinsen were not looking for a story when they visited relatives in Florida back in 2018. It found them. It was dancing in sparkling low-cut dresses on a semi-truck flatbed. “We have two kids together, and the oldest one was crazy about cars back then. We went to an event where kids could see police cars, ambulances, tractors, everything you can think of,' says Loohuvfud. “And you could also see the Calendar Girls.”

Cue Neil Sedaka here. Calendar Girls follows a dancing troupe of about 30 mature women living in South Florida. The crowd-pleasing documentary premiered at the Sundance Independent Film Festival, 2022. It challenges our preconceptions about what growing old can be. Leader Katherine Shortlidge manages the group with military precision. It is necessary to keep the group going through a grueling schedule of about 100 performances per year and three weekly rehearsals. And yes, they do put out a calendar. Their efforts go towards providing funds for Southeastern Guide Dogs, a nonprofit that provides dogs for visually impaired or PTSD-afflicted veterans. You can learn more about them - even book their act! in their official website. 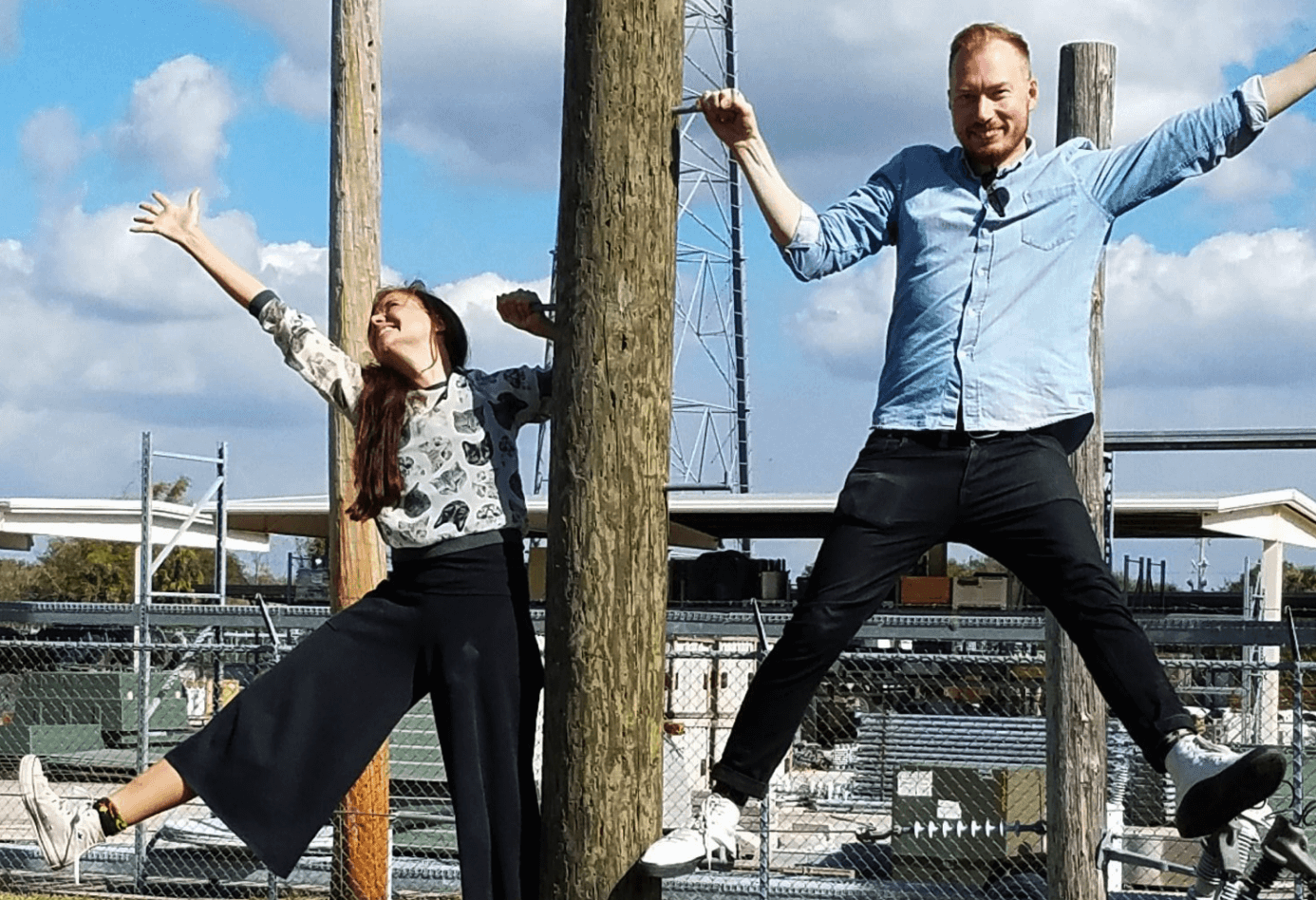 Loohuvfud and Martinsen get in the spirit of Calendar Girls / Photo: Love Martinsen

When Martinsen approached Shortlidge, nobody was clear that they were moving towards making a feature documentary. “We were like, ‘let’s just film something and see what happens.' They thought we were shooting for a few days, go home and not come back. And when we got back, we spent a month and a half there. Then, they started realizing this was serious! They were not going to get rid of us that fast!”

The filmmakers executed four trips to shoot, each one about six weeks long. COVID shutdowns forced the cancellation of a fifth one. "It might have been a good thing, because it forced us to stop filming and finish the film. It is hard to stop filming when you are following someone. Things happen, and you keep thinking, 'oh, this is interesting'!" Says Martinsen. "There was not much to do, other than sit and edit the film."

Life hack for married filmmakers with small kids: get the grandparents to come along for babysitting duty, especially when the group of subjects you want to cover is so large. We asked Loohuvfud how they decided who to focus the story on. “We did not know at the start. We just filmed everyone. All of them had fascinating stories and career backgrounds. There was a new member, Patty, and it was obvious from the beginning that we wanted to follow a new member. And the leader, of course.”

“We filmed about nine of them at first,” adds Martinsen. “And then, we noticed this story together with this story will fit together for the film. So, when we started doing the script, we realized who was most important for the film. The other ones we followed a little bit closer, Fran and Nancy, we did not know that would happen,” says Loohuvfud. “They are the ones with whom we got a closer connection. I think on a personal level, some people you click with and some people you do not. So it was that, and they wanted to be in the film.” 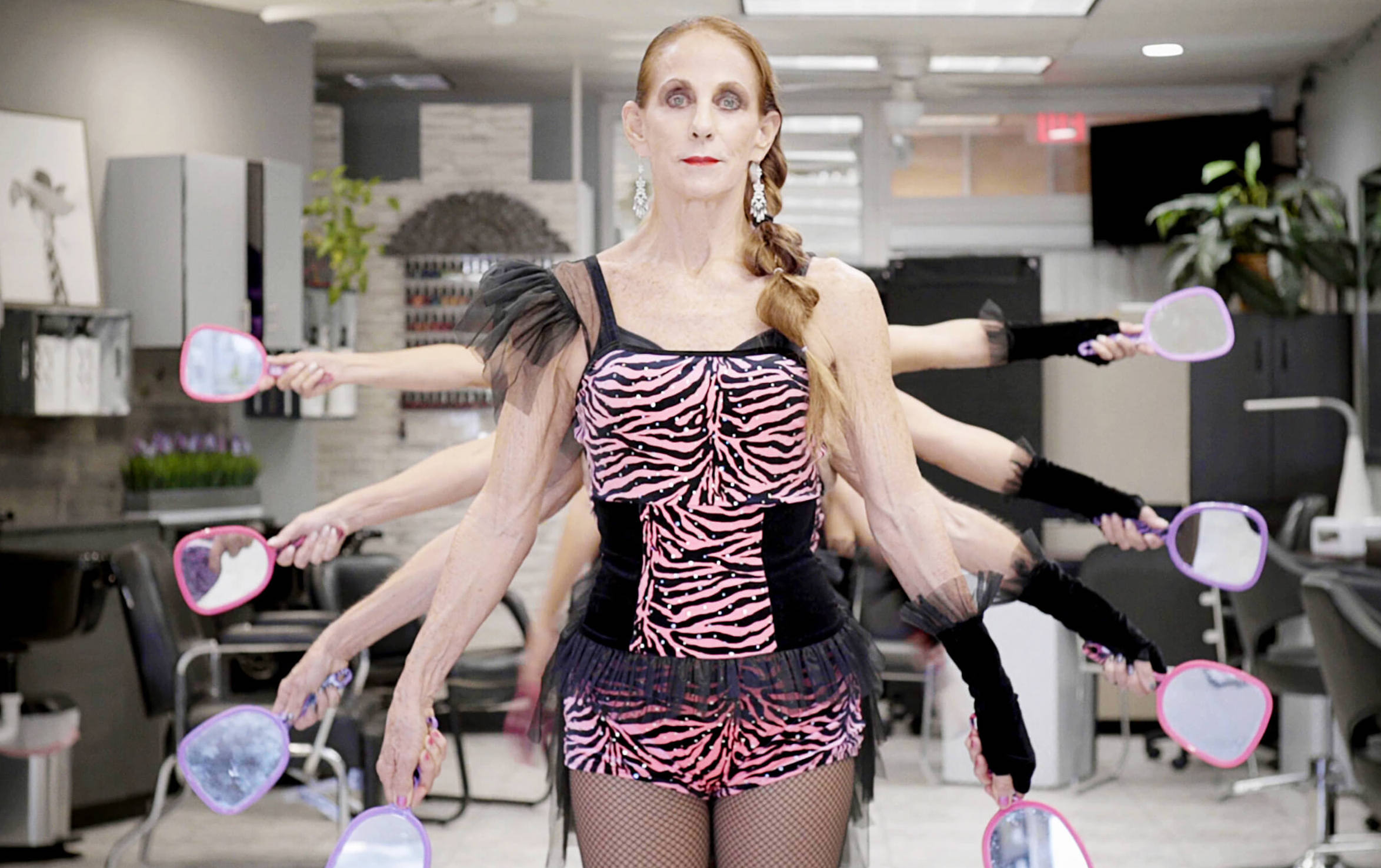 Calendar Girls begins with Katherine Shortlidge coordinating events in a phone group meeting as she power-walks in the Florida dusk. Multitasking is in her blood. You follow other members as they prepare,rehearse, and perform at an event. They drag their equipment back to their car, and just as you begin to feel the grind as they put stuff in the car, a particular rhythm sneaks into their movements. And just like that, a mundane action triggers a fanciful Pas-a-Deux on a parking lot. The mundane and the sublime dance together.

The observational flow of images gets periodically disrupted by fanciful dance numbers. “I love musicals,” says Loohuvfud. “I do not have a professional background in dance, but I love it. I have danced a lot.” Martinsen adds, “We wondered how to take this one step further and try a different way of expressing because even if it is not happening for real, there are real feelings. We are portraying actual events, only intensified by the choreography."

The most elaborate numbers required a lot of preparation. A scene of the Calendar Girls getting ready for a performance segues into a Busby Berkeley-like extravaganza set within the confines of a strip mall beauty parlor. Loohuvfud and Martinsen engaged choreographers in Sweden and had the company recreate it back in the US. Other numbers manifested in the spur of the moment. 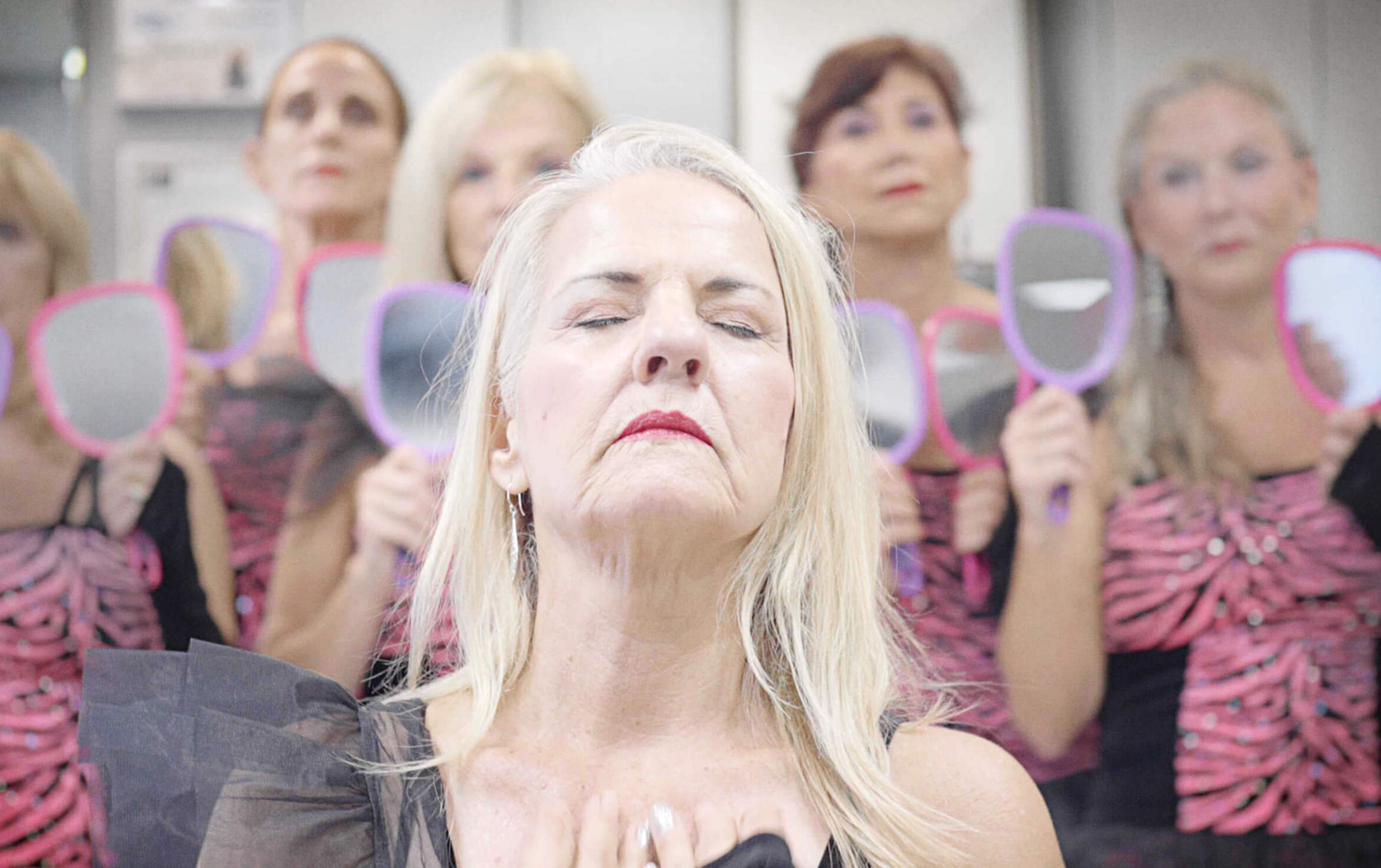 In the most poignant scene, Nancy faces a health crisis. “Those scenes were filmed in the actual process of her going through her emotions. It is her actual improvisation in the dancing,” says Martinsen. That day, they followed Nancy as she went about her workday, inspecting power lines under the unforgiving Florida sun. And then, she started dancing. It is like something out of Dancer in the Dark (Lars von Trier, 2000) but sweeter.

The filmmakers decided to keep family life mostly at bay. One husband gets some screen time, but he operates as a low-key conflict catalyst. “We wanted the film to be from their perspective, not people sitting and talking about them, but also the families are not that involved. Many of the families do not live in Florida. Some of them go to the shows, but most don't. So it was both practical and a narrative decision,” says Loohuvfud. “ We wanted to make you feel as a viewer, almost like you are part of the group when you are in it with them,” adds Martinsen.

The movie challenges our conceptions of how a mature woman should behave and look. Imagine a dance corps of mature Rockettes performing pop hits in bingo parlors and county fairs. Glitter, miniskirts, and fancy headsets abound - a member is in charge of designing and making clothes and hats. At one point, Shortlidge shares a poem equating the dancers to unicorns. And they do dress like unicorns. “We got interested in how they look because you do not see it in many places. In a sense, it is very freeing for people their age. 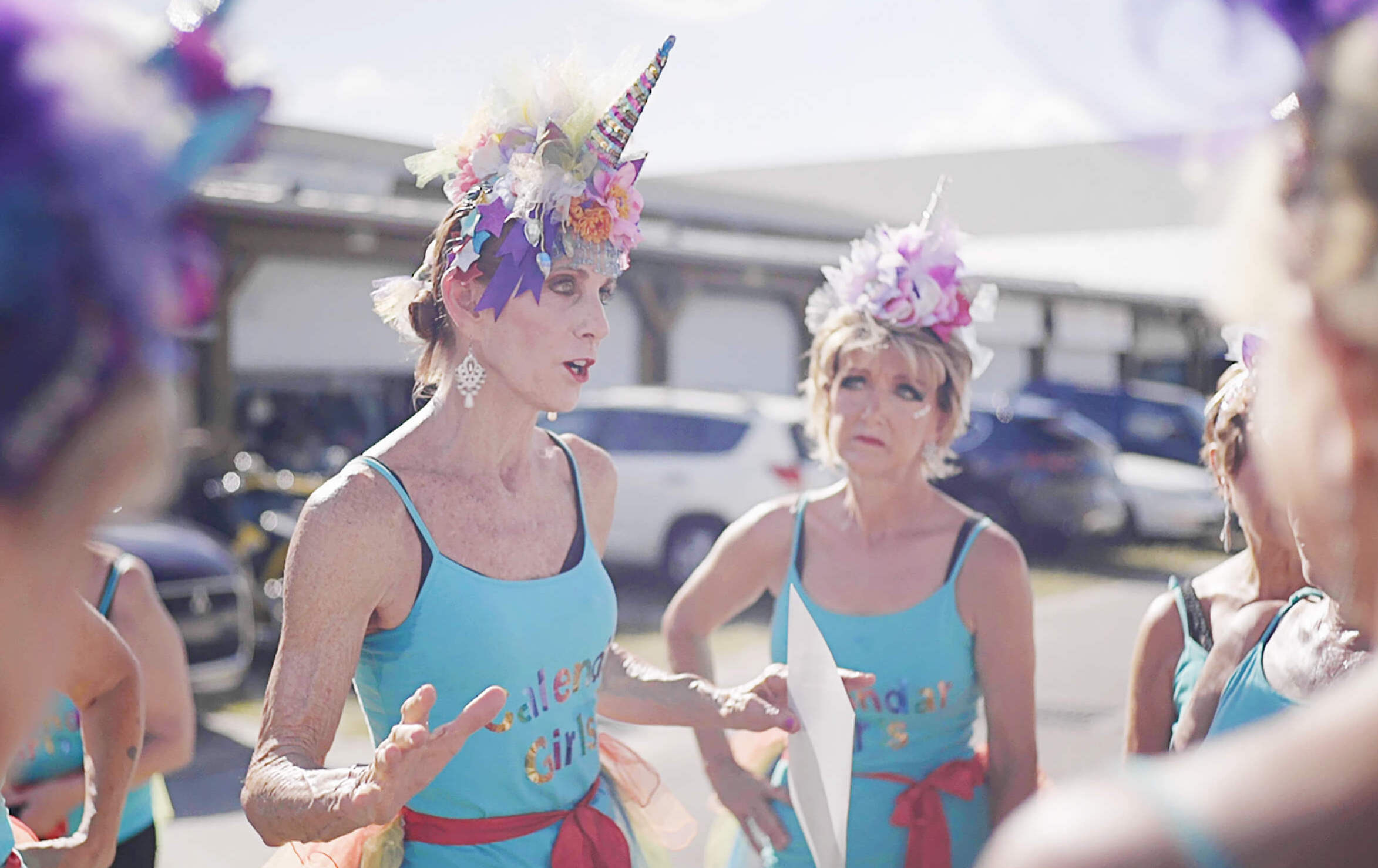 While they splurge sincerity, you see the risk of the story falling prey to Florida kitsch. The state occupies a very particular space in America’s imagination, easily associated with Florida Man memes and a recent former president of the United States. “In Sweden, there are dance teams for women this age, but they do not have a lot of sequins and makeup and everything," says Loohuvfud.

Pageantry and excess are as American as apple pie, but underneath it all, there are universal truths. “For us, it was a brave thing to do. It is a feminist statement. They are brave by doing this, going out in miniskirts in the street, just dancing.”

Women everywhere are identifying themselves with Calendar Girls. “We have been to a lot of festivals around Europe and also in Asia. There are mostly women in the audience, most of the time, and they say ‘This is me! It is about my life. And that is fascinating. In South Korea people say the same thing as in Italy and the US.”