The Jerry Falwell Jr. scandal was one of the biggest stories of 2020 or one of the most salacious political scandals of that year. Take your pick. It became a kind of sideshow as the pandemic upended everyday life and quickly receded into oblivion. If you want to stroll down the recent-memory lane, Hulu released God Forbid. Billy Corber's documentary recounts the story from the point of view of Giancarlo Granda, the young man who almost inadvertently brought down the power couple of the evangelical church.

It all began in 2012. Granda worked as a pool attendant at the famed Fontainebleau Hotel in Miami Beach. A somewhat aimless young man, he wanted to make some cash while deciding what to do with his life. He got a lot more. One good day, a mature woman sunbathing set her sight on him and invited him to her hotel room. Her name was Becki - yes, Becki with an i. In time, she revealed that she was married and that her husband, Jerry, wanted to participate in the sexual encounter. You see, he liked to watch her getting pleasure from other men. 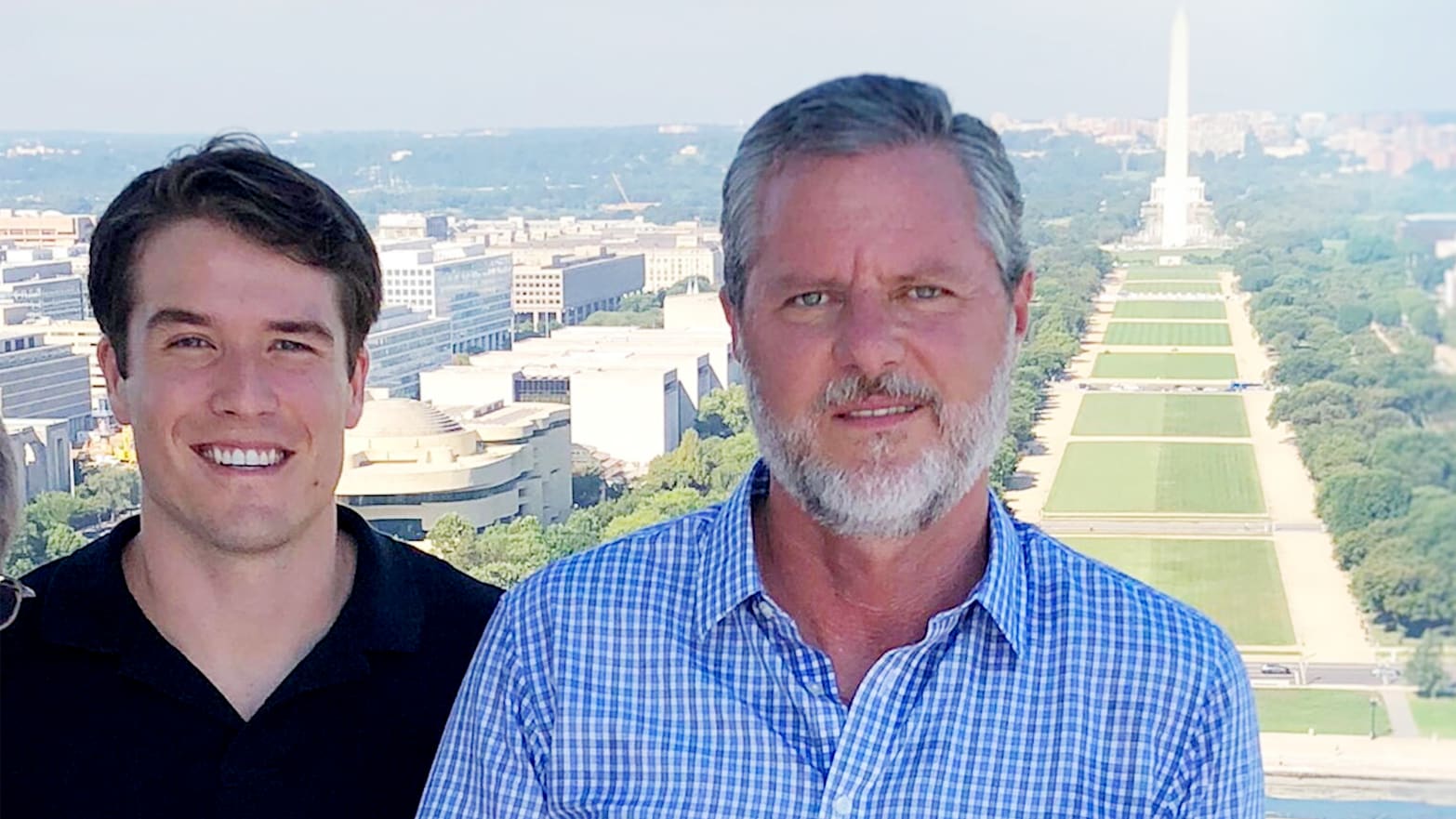 In our sex-positive times, there should not be any shame in consenting adults satisfying their cuckold fetishes. You might think the pickup is borderline creepy, but it was not illegal. Grande was 20 years old, and in Florida, the age of consent is 18. The catch is that Jerry and Becky were not just any couple of adventurers. He is the son of Jerry Falwell. His father turned evangelical Christians into a decisive force in the political arena. In the process, Falwell also became very rich. Falwell Jr. inherited everything, including the leadership of Liberty University, a Virginia-based school that works as the epicenter of conservative America. Students are discouraged from partaking in sex, drugs, and alcohol. The problem with the Falwell affair is not their horniness. It is the hypocrisy that is galling.

God Forbid tells the story from Granda’s point of view, with sides from his sister and journalists who investigated the case. Academics provide historical context, including the fraught relationship Falwell Sr. had with the civil right movement. Alas, you will not hear from the Falwells themselves. Corber recruited look-alike actors to work around their absence. They appear in slickly shot and edited scenes. Faces are off-centered or obscured by design, but the trick works. A generous helping of archival material, video, and photographs goes a long way to make them present, despite their lack of cooperation.

The movie is a prime example of what I like to call a tabloid documentary. Imagine a Dateline newsmagazine story stretched to feature length and with no commercial breaks - if you pay the no-ads option at Hulu, that is. All the toys of digital production are put at their service, going into overdrive. Streaming services have a voracious need for content, and they opened the floodgates to this kind of product. The true crime bonanza is one of their offshoots, too. Audiences are fickle, and there is a lot to choose from. So, newsworthy stories with kinky elements are good bets. They just might cut through the noise and grab some eyeballs. After all, they are important stories. They were in the news! Right?

Schadenfreude also makes for good bait. Remember the debacle of The Fyre Festival? The failed multi-day music festival to be staged at a tropical island inspired not one but two competing streaming documentaries. Hulu hit first with Fyre Fraud (Jenner First & Julia Willoughby Nason, 2019), and four days later, Netflix dropped Fyre (Chris Smith, 2019). In the same week you had two versions of the same story. Laughing at the travails of tech bros., influencers, and moneyed youth is a powerful enticement. However, the movies were more effective when they occupied themselves with how the con affected the locals.

Nostalgia is also captivating. Check out on HBOMax Class Action Park(Seth Porges, Chris Charles Scott III, 2020). The documentary tells the story of a legendary water park in New Jersey, notorious for its disregard for the safety of his clients. Former employers, detractors, and enthusiasts - survivors? - of the institution share their recollections in the film equivalent of an oral story article. Plenty of grainy VHS-grade video will send you back to the 80s, just as effectively as the fashion and hairstyles in view. Classic MTV fans will cherish bits of a Headbangers Ball episode shot on the premises. It was an appropriate crossover. The music channel and the deadly theme park had the same demo, and well, heads would bang at the darned place.

In the immortal words of Stefon, God Forbid  has everything: the spectacle of powerful people falling off their pedestals! Remembrances of the pre-pandemic, pre-Trump presidency era! The embattled leader of the Republican Party is also a player in the story, albeit marginally. The movie shows his visits to Liberty University, including the town-hall meeting where Falwell endorsed his candidacy. It is debatable whether this gesture secured his nomination. By propping up Falwell's influence, God Forbid argues for its importance. The couple dangles access to Trump like a carrot in front of the impressionable Granda. The boy read The Art of the Deal and was all-in on the greedy Trump ethos.

The most compelling aspect of the movie is how Giancarlo Granda uses it to reclaim his story and redeem himself in the eyes of the public. While he was not underage when the relationship started, the imbalance of power between him and the Falwells makes for an exploitative dynamic. To add insult to injury, the volatile combination of a story covered in fits and starts and social media turned him into the butt of a joke: the pool boy as a sexualized prop.

His extended interview serves as the narrative spine of God Forbid. He, and the rest of the people on camera, are mostly shot looking straight at the camera. You can track down this framing to Errol Morris, the documentarian who developed the interrotron, a device that allows the interviewer to talk straight to the subject. To have the person on screen looking directly at the audience used to have a striking effect, but it has somewhat diluted due to its ubiquitousness.

The filmmakers get impatient with contemplating a person for too long and sometimes cut to a different angle. They fear losing their grip on the audience. In the end, this is a product made for our attention-deficient times. Fast cuts and plenty of visual stimuli are necessary to convince the audience, second by second, not to wander off to the smartphone screen. The movie falters under the weight of its ambitions. As it clocks over an hour, it stretches the story to make the one-hour-and-a-half mark. Granda makes a compelling case for himself, but God Forbid never goes beyond morbid curiosity. I cannot help but wonder what someone like Morris would have done with this material. It is a doozy.

* God Forbid is available for streaming at Hulu.