The notoriety of The Bitter Stems makes you ache for all the unsung film classics we will never see. Serendipity and the zeal of some true believers conspired to bring this beautiful, dark example of Argentinian noir within our reach. The movie was successful and celebrated in its country of origin, but it had fallen off the radar by the early aughts.

Enter historian and critic Fernando Martín Peña, who rescued the film elements from the collection of a deceased collector. He found his best ally in Eddie Mueller, of TCM’s Noir Alley fame. UCLA Film & Television Archive and the Hollywood Foreign Press Association’s Charitable Trust made the restoration possible. The pristine new copy made the rounds in festivals and cinematheques, earning the movie veritable cult status. Now, anybody can discover it thanks to Flicker Alley’s dual Blu-Ray and DVD editions.

The action takes place in mid-fifties Buenos Aires. Alfredo Gasper (Carlos Cores) is a reporter whose delusions of grandiosity die while he covers the grueling night beat. Enter Liudas (Vassili Lambrinos), a Hungarian immigrant with an irresistible get-rich-quick scheme: they will open a Journalism school by correspondence. The idea might sound ludicrous to contemporary audiences, but the movie explains how this questionable enterprise might work. Liudas knows this is a fraud but proclaims he does it for a good cause: to bring his family to Argentina. For post-World War II Europeans, the American continent, not just the United States, was a land of opportunity.

Gasper makes Luidas’ dream his own. He works tirelessly and even gives him most of their earnings. But his insecurities get the best of him. Soon, he begins to suspect Liudas is conning him, making up his European family to exploit him. Suspicion curdles resentment, and he plots revenge. The movie’s first scene finds the men taking a train to Gasper’s family home outside the city. The pretext is to take a vacation. Ominously, Gasper only buys one-way tickets. 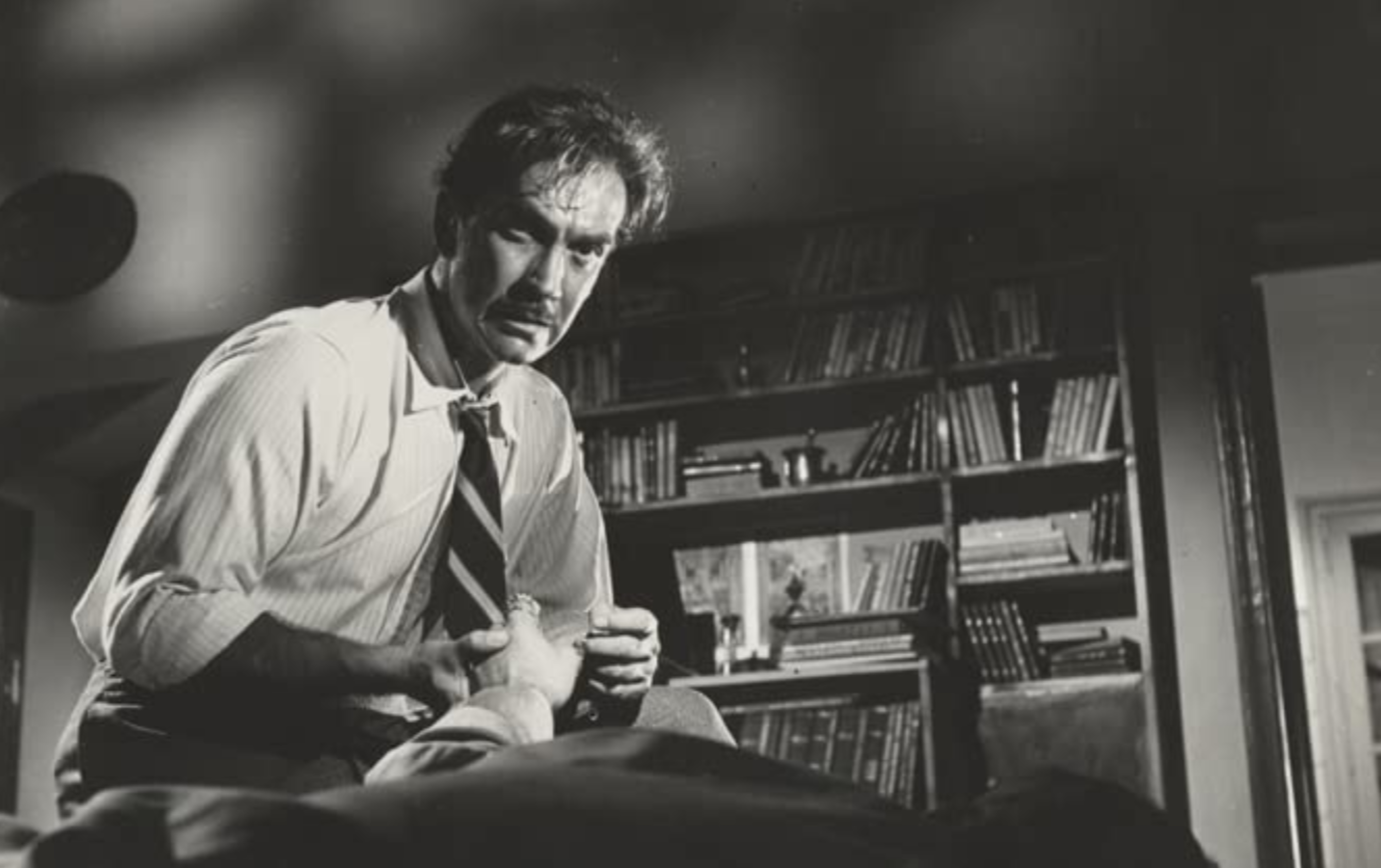 The less you know going in, the best first-time viewing you will have. The script by Sergio Leonardo, based on an award-winning novel by Adolfo Jasca, sets up an intricate flashback-centric narrative. On his way to the fateful vacation, Gasper remembers how he got into this mess, to begin with. The movie vividly recreates the demimonde of daily newspapers as a soul-crushing grind. You almost understand why our anti-hero would jump at an opportunity to leave this racket behind. This movie should go in the pantheon of dark explorations into the seedy side of journalism, next to Ace in the Hole (Billy Wilder, 1951).

Director Fernando Ayala puts you inside the head of Gasper, with his self-pitying narration driving the plot. Just after meeting Liudas, who moonlights as a bartender in a Cabaret, we fade into a fateful nightmare, filmed as an expressionistic fever dream. It features the faceless, unreachable singer he never meets because she took the night off. Instead, he gets Liudas taking and serving a cocktail made of gold coins. Giant bills create an optical maze. The mise-en-scene might remind you of the climax in The Lady From Shanghai (Orson Welles, 1947).

This bravura dream sequence is equal to Salvador Dali’s work in Spellbound (Alfred Hitchcock, 1945) while being more utilitarian in narrative terms. In just a handful of images, it serves Gasper’s rich backstory and the root of her existential malaise. His father was a German World War I hero who died when he was a kid, leaving a model he can't live up to. His sense of inadequacy is pathological. On a level, The Bitter Stems is a film about fathers and sons. Liudas keeps going on about his firstborn, Jarvis. Gasper responds to his expressions of paternal devotion. That is why the tipping point of murderous fury comes when he decides Liudas invented the family story out of whole cloth to take the money away from him. We know he offered the money, but fury and self-pity blinds him. 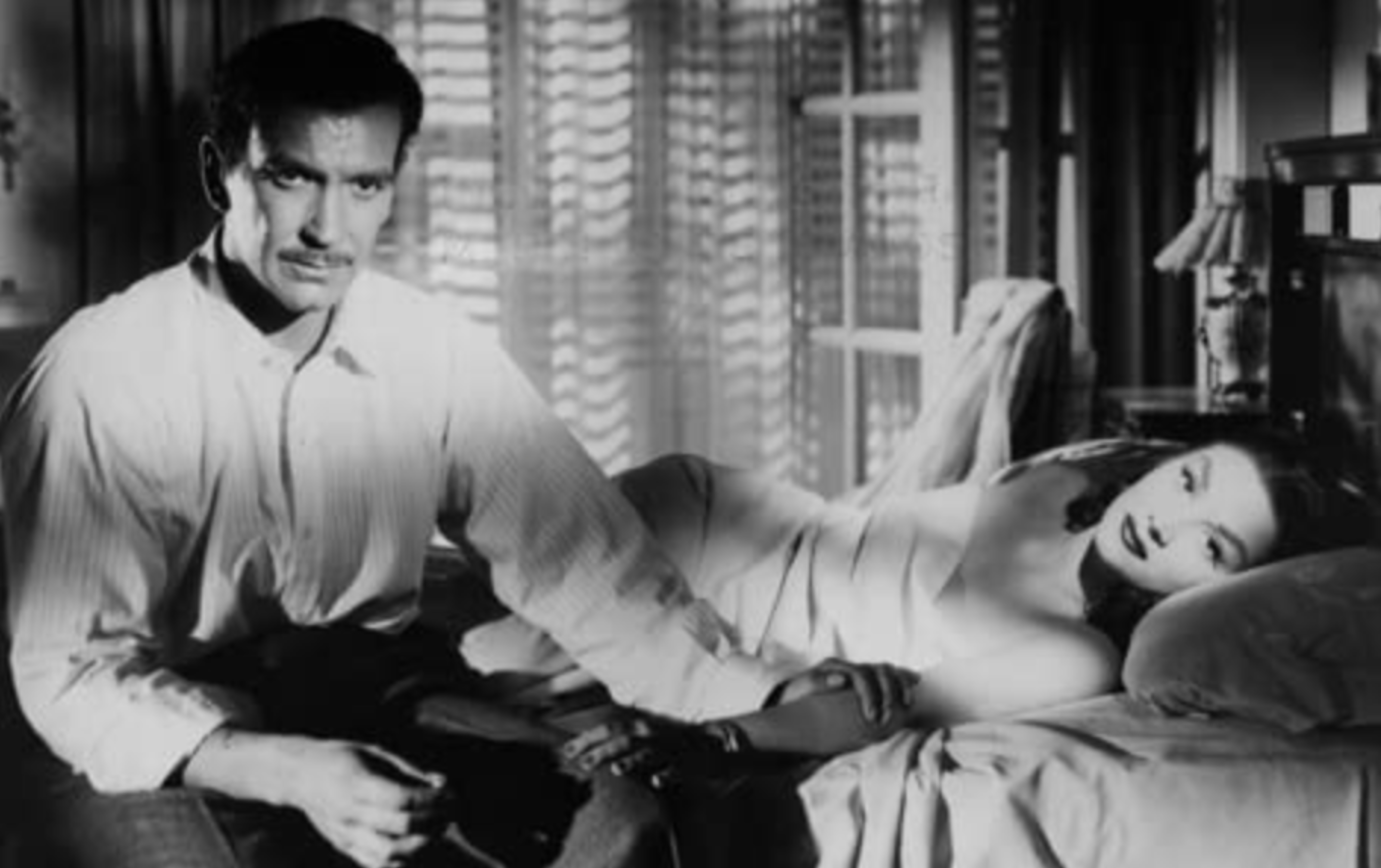 The realization comes in a marvelous scene set in a nightclub. The band plays a pulse-pounding jazz number - the film score was written by Astor Piazzolla. Seated close to a table where Liudas wines and dines a lady friend (the marvelous Aida Luz), Gasper hears bits and pieces of their conversation as the band as music stops and starts. It is enough to convince him that he has been taken for the proverbial ride. What is left to do but take revenge? In classic noir fashion, nobody comes out clean. At some point, Liudas confesses guilt about stealing from suckers, but it does not prevent him from continuing the ruse. He even manifests regret at corrupting his friend, "a good journalist". We all get it in the end, and we all deserve it.

Ayala, working with Chilean cinematographer Ricardo Younis, uses camera movement, lighting, and studio craft to put us in Gasper’s perspective. Better yet, we end up on the same wavelength as his feelings. You will not be surprised to discover Younis was a disciple of Hollywood legend Gregg Toland, the right-hand man of Orson Welles in Citizen Kane (1942). Younis' work in The Bitter Stems is equally revolutionary.

All this movie magic rests on the shoulders of Carlos Cores, who had a long career in Argentinian cinema, gives a masterful performance. Nowadays, it would grant you international exposure and opportunities. He looks like a more handsome David Thewlis. You feel sanity oozing out of his body like the sweat soaking his shirt.

This compelling loser grabs you by the lapels to take you over fateful plot twists that will shock you. Of course, this is what had to happen. We know Gasper is doomed. Still, it is shocking to see his fate playing out. The tropes of the genre feel new in a beautifully evocative Buenos Aires. Its European flair contrasts with the semi-rural exteriors. A warm childhood home, wide open spaces, no place offers refuge for Gasper. A brutally ironic end will leave you electrified and in despair. The Bitter Stems is the kind of movie that demands revisits. It is impossible to grasp so much cinematic inventiveness in one viewing.