Love and Mathematics: Claudia Sainte-luce and the Plight of a Boy Band Survivor

Paging JC Chasez! The plight of the less-than-stellar boy band veteran is at the center of Love and Mathematics by Mexican director Claudia Sainte-Luce. A quietly subversive comedy of middle-age angst, it follows Billy (Roberto Quijano), a former member of the fictional band Equinoccio, now languishing in suburbia. His glory days of supermarket concerts behind him, he is now a stay-at-home dad taking care of his firstborn son, while his wife Lucía (Daniela Salinas) goes off every day to earn their keep. The closest he gets to regular work is juggling business ideas with his brother, hoping their father will foot the bill.

Billy is in a rut, and Sainte-Luce identifies with his feeling of dissatisfaction. “My third movie was not picked up anywhere, which made me lose a lot of faith in myself. I would think that maybe I was not cut-out for this! I will have to rethink my life and get into a different line of work. Maybe event decoration or opening a cat shelter. I was feeling very down.” Those doubts are far behind as the movie, her fifth feature film, premieres at the Toronto International Film Festival.

Sainte-Luce met screenwriter Adriana Pelusi almost a decade ago, at a writing workshop.“I was doing the script for Los Insólitos Peces Gatos (2013) back then. She believed I would say no to it, and she was partly right. It was hard to let go of the idea that I had to write my movies. She shopped around, but after many encounters with directors who wanted to change the script, she reached out to me and said, ‘I want you to do this.' I said I would not change a thing except for a small adjustment at the end. She agreed, and we pretty much shot the original script she wrote nine years ago.”

It was her first time shooting a script written by someone else. “It is easier because everything is already there.” - says Sainte-Luce. “It is only a matter of analyzing the text, considering the reasoning behind the dialogue. How to say it? What is the subtext? Many directors concentrate on telling their own stories, working with sound and stage design. What inspires me the most is the actors. Of course, many people work in a movie. But it is the actors who face the camera. Without them, nothing happens. And I love working with them.”

Known for her intensive rehearsals, Sainte-Luce did not get much time with Diana Bovio, the actress playing the pivotal role of Mónica. She is another unsatisfied soul, a wife and a mother who has just moved across the street. She immediately recognizes Billy, for whom she holds a teenage crush, and even keeps a scrapbook of his musical career. Her forthcoming adoration inspires him to consider a musical comeback while threatening to cross the line into an adulterous affair. Love and Mathematics is the title of the musty song he rescues off an old notebook to make the centerpiece of his return.

“We did an intensive week of rehearsal with the two of them at my place. In the beginning, actors come in with many ideas and fears. You might think they are being prideful, but no. It is like a safety mask. They use it to cover what they feel, which is fear. My job is to make them feel in a safe space, so they can discard the mask and the tools they gather working in commercial filmmaking. There, they do not get much feedback from directors. They tell you to do your thing, hit your mark, and say your lines because they have to shoot 12 script pages daily.”

“It’s awful to get to the set on the first day and just start working. Even if you only have one line. We need to get to know each other. We must earn each other’s trust. If you get that, once you hit the set, everybody is more sure of themselves and how to approach their characters. But still, they can surprise you. Maybe they feel different that day, or their imagination produces something that improves the character. You have to be open to this kind of thing.”

Most of the action takes place in a posh gated community, the kind that offers the Latin American middle-upper class the illusion of partaking in the American Dream. The setting gives Sainte-Luce a chance to hold a mirror to society at large. “Everybody buys their decoration at the same store. Everybody covets the same car, but do not have the money to afford it, so you can only get so far. We are always competing with the person next door, and we are all trapped in this bubble. It is a distinctly middle-class phenomenon in Latin America. The poor are very poor. The rich are way up there, unreachable, and the middle class is floating there, filling up the malls on the weekends.” 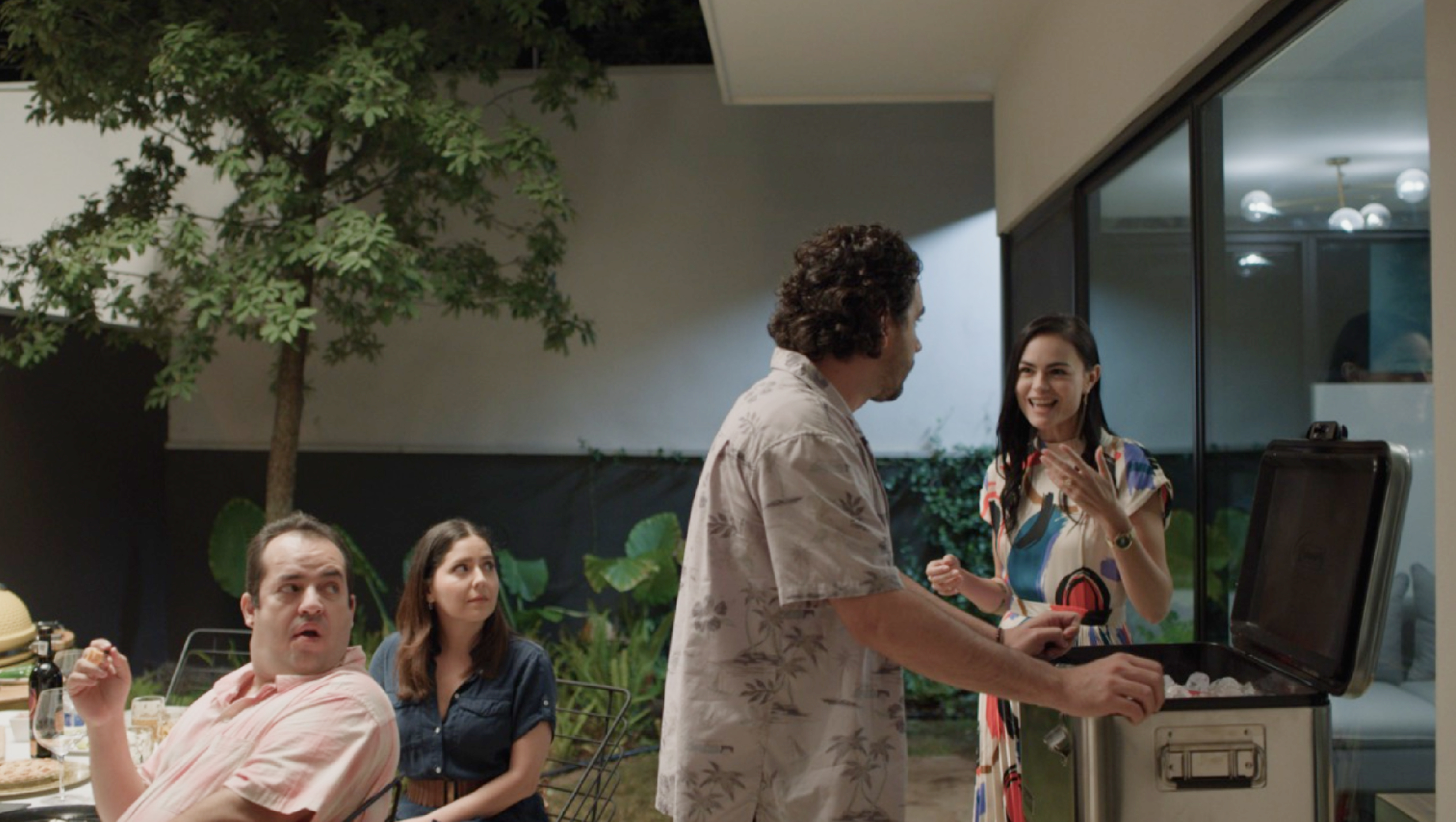 Director of photography Carlos Correa shoots in 4:3. I thought this creative decision spoke of the diminished circumstances of the lead character. A physical manifestation of how his life could be, well, more. Alas, Saint Luce was thinking of something else.

“I was always thinking about music video clips from the 90's. Those we used to see on MTV, their format was 4:3. All TV was in 4:3. It is a format trapped in the past. It locks you in there. Everybody questioned me, but I did not care. It had to be this way! Something similar happened with the sound. Nicolas Aguilar recorded our direct sound with a vintage Nagra recorder, which records analog sound. You get little distortions. They are hard to notice, but they are there”.

Every generation gets a new crop of boy bands carefully crafted to feed teenage dreams. The young Saint Luce was not immune to their heavily choreographed charms. “I liked Mercurio a lot. In English, there were New Kids on The Block. Magneto played to an older crowd. I was younger. Also, I was into Kabah, OV7…but the one I liked the most was Kairo!

The revelation begs the question, is there something of Monica, the super fan, in the director?

“Monica is obsessed with music, but I am obsessed with film. I do not lose my cool for actors but directors. Yesterday I saw a movie that made me cry for half an hour. There'll be a screening today with the director present. Part of me wants to go and see if some of his wisdom rubs off on me. But the other part is like, ‘no, I can’t! I’ll make a scene!”. The movie is Manticore by Carlos Vermut. I dread the day I cross paths with master Céline Sciamma. One day, I was in an airport in Berlin, charging my phone. Claire Denis sat down close to me. I could not take it. I had to get up and leave!”