That sinking feeling in Avatar: The Way of Water (James Cameron, 2022)

By Juan Carlos Ampie12/23/2022
The return of the blue cat people: Worthington and Weaver in Avatar: The Way of Water / Photo: 20th Century Fox

God bless James Cameron. By sheer force of talent, he became a force to be reckoned with in Hollywood. The Terminator, a scrappy, stellar B-movie, launched Arnold Schwarzenegger to stardom and began a franchise that resists death even after successive attempts to restart it has failed. With Titanic, he restaged the famous disaster amid a tale of star-crossed lovers. Oscars and broken box office records granted him a license to kill. And what he wanted to do was explore the depths of the sea. His expeditions yielded two documentaries and little else until he came up with Avatar (2009).

Full disclosure: I was not a fan, but what do I know? The movie made a truckload of money, almost 3 billion dollars worldwide. It gave the filmmaker even more clout, enough to spend the rest of his career expanding that narrative world. After 13 years, he premiered the long-in-the-making sequel, Avatar: The Way of Water. Do not think for a minute that the man was procrastinating. An avid tech-head, Cameron was developing the technology necessary to realize his vision, a higher frame rate that allows for smoother movement and brighter images - the dim image was a bane of the aughts’ 3D revival. He even remastered the original Avatar in 4K and Dolby Atmos 9.1 sound to revive it in theaters before the premier of the new chapter. 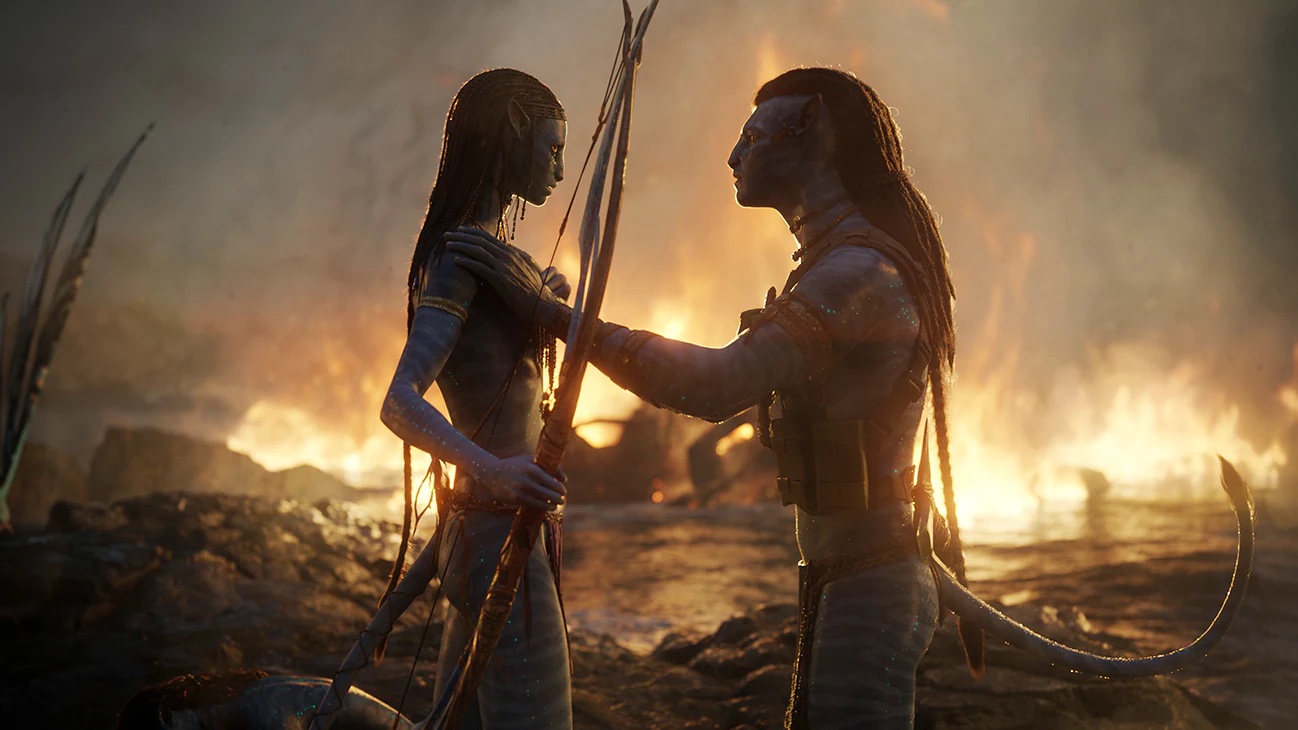 I passed on revisiting Avatar, but I remember enough to recognize a retread when I see it. Less than a continuation, The Way of Water plays like a remake. Jake Sully (Sam Worthington) and Neytiri (Zoe Saldaña) are older and have a brood of children to care for, but the dramatic arc is virtually the same. Humans come back to Pandora. They want to colonize the planet because the earth will soon be uninhabitable. A posse of soldiers transfigured into Na’vis must find and exterminate Sully to decapitate resistance. The leader is a clone of Quaritch (Stephen Lang), the villain from the first movie. Sully and his family retreat into the territory of the Metkayina clan. They reside in huts suspended over distant coral reefs, living off and for the sea.

The same dynamic of discovering and learning the ways of native people takes place, this time, shared between the grownups and the teens. Like the Na'vis, the Metkayinas have a magical tree to which you can connect your magical tail to become one with the universe. The white conquerors pillage the riches of the natural world. In Avatar, they were after a substance called Unobtanium. This time, covetous humans are after Amrita, a liquid extracted from the brains of the tulkuns. They are giant whale-like creatures that roam the seas and have a special relationship with the Metkayinas. The amber-colored fluid is said to bring eternal youth, which makes it super-expensive. Many complications ensue until the overloaded plot wraps up in an extended action piece that leaves the door open to a sequel, or two or three. 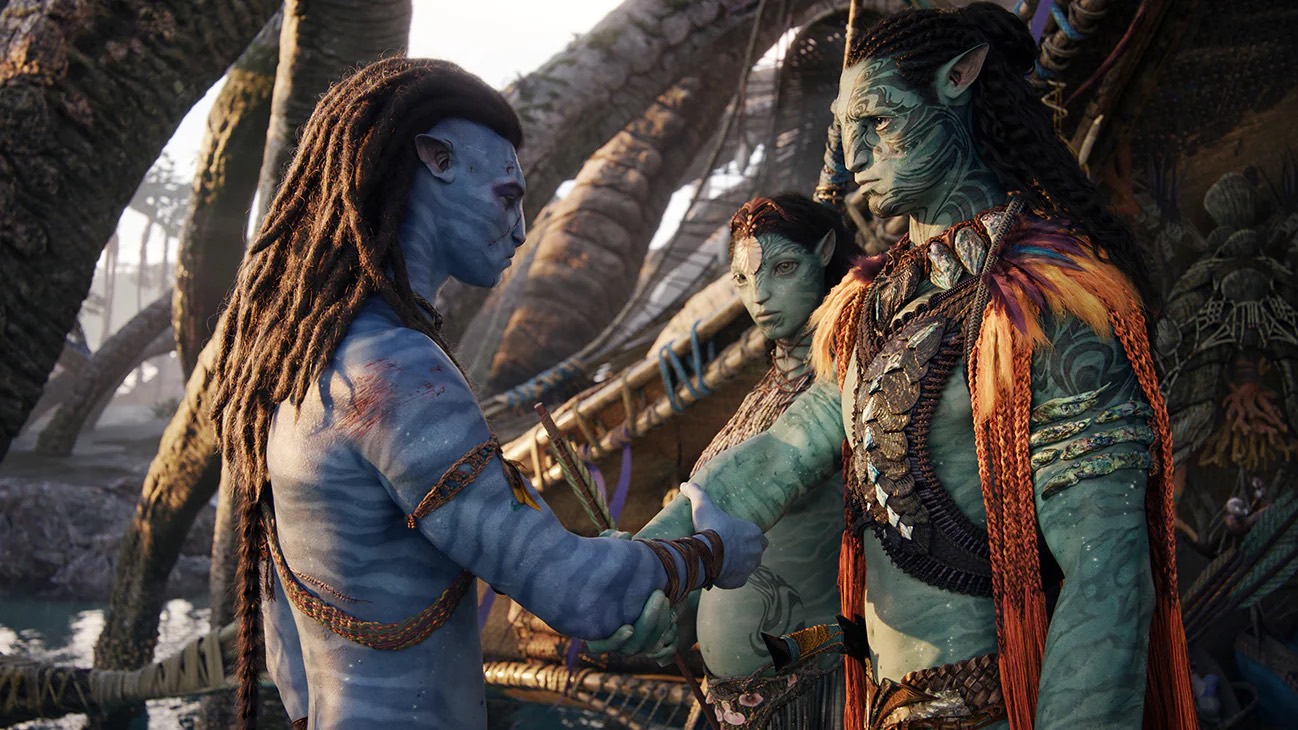 I remain immune to the alleged beauty of Avatar. I find something off-putting in the aesthetics. The new age-ish sensibility of the design, the freakish feline appearance of the Na’vi or the particular shade of blue they decided for them. The look falls firmly in the not-for-me camp. You have to hand it to Cameron, though. The design is garish, but the images are so clear and tactile that they jump off the screen. It depends on the eye of the beholder whether that makes for a pleasant moviegoing experience. The higher frame rate he favors makes everything crystal clear, but it reminds me of the motion-smoothing effect visible in flat screen TVs in pretty much every living room, sports bar, or showroom in America. For all its technical derring-do, the dreaded soap-opera effect is alive and thriving in Avatar.

Cameron’s obsession with higher frame rates reminds me of the famous scene in This is Spinal Tap (Rob Reiner, 1984), where death-metal rocker Nigel Tufnel (Christopher Guest) insists his amplifier is better because it goes to eleven. It is an improvement that signifies nothing or very little. You may admire the quality of the image at the beginning, but soon after, it becomes just the new normal for those two or three hours. I get the same feeling with 3D. In a way, I think the market has spoken about this kind of improvement. The first Avatar came at the peak of the studios' push for 3D, which since then has petered out. Instead of setting down a new standard, Cameron makes outliers. I know this is partly a problem of exposure. For good or ill, my reference to what movies should look like comes from watching a film projected on the screen. My exposure to video games phased out with the Atari 2600. A young person whose audiovisual diet includes more high-grade video games might be more open to accepting the digital animation Avatar offers. 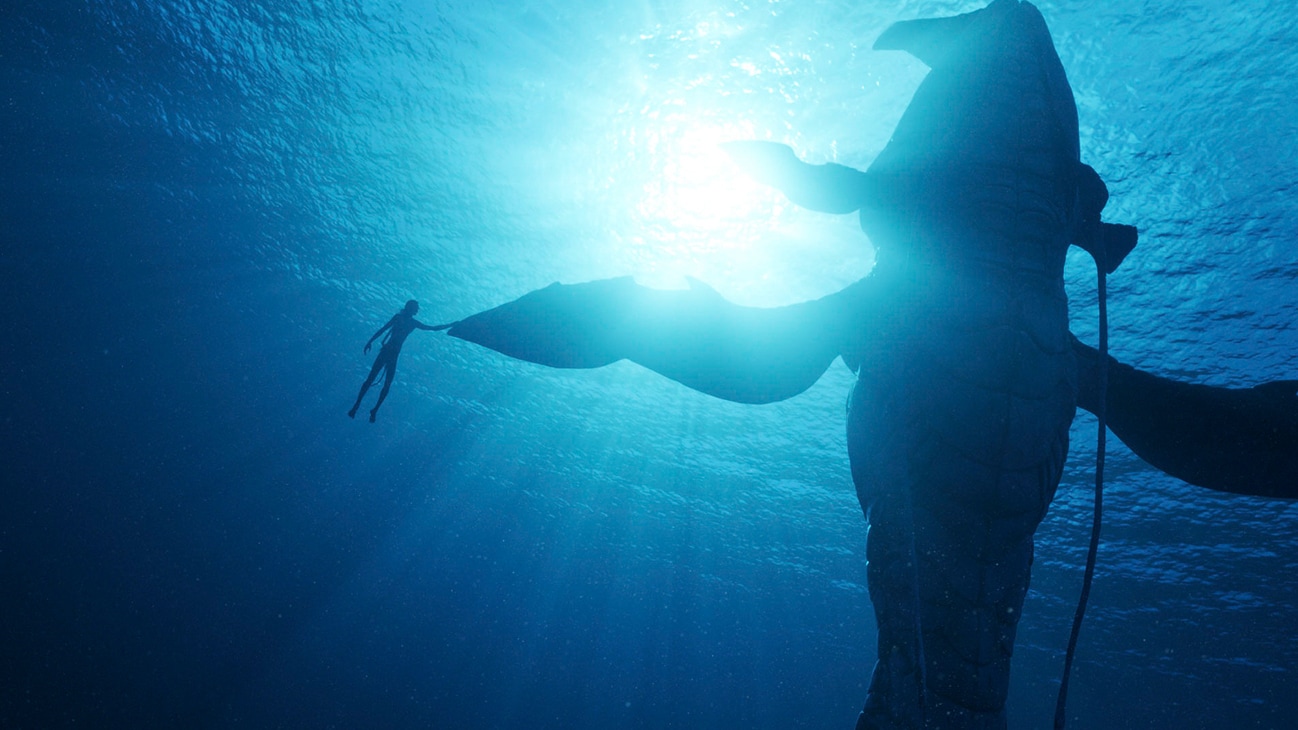 My friend, the Tulkun: a momentary lapse of calm in Avatar The Way of Water / Photo: 20th Century Fox

As I watched the movie switching frame rates from landlocked to underwater sequences, I could not help to think of The Women (George Cukor, 1939). The classic Hollywood comedy follows a clique of female friends shaken by the news that the husband of Mary (Norma Shearer) is having an affair with a younger woman. Halfway through the movie, the luscious black & white disappears, and an extended technicolor sequence depicting a fashion show at a high-end store takes over. It may be a catchy bit of eye candy, but it does not add anything to the movie. Like its predecessor, The Way of Water feels like the longest, most expensive HD screensaver ever made.

Alas, the most interesting technological development is getting overshadowed by the HFR. Through the magic of motion capture, 73 years old Sigourney Weaver plays a teenage girl. Her name is Kiri, and she is the daughter of Dr. Grace Augustine. She remains unconscious, in a coma, suspended in a sensory-deprivation chamber, and somehow, conceived a child. The script by Cameron, Rick Jaffa, and Amanda Silver does not explain this development. They position the character as an adoptive daughter for Jake and Neytiri. Fear not. The juvenile mystical tendencies of the material point towards a magic immaculate conception, and not some icky Talk to Her (Pedro Almodóvar, 2002) scenario.

It does not matter how silly this plot line turns out, if Cameron and his fellow writers even bother to play it out in future installments. What matters is that this technology gives way to the most achingly human performance in the whole film. Kiri develops a special connection with the sea and its creatures. The scenes where this development plays out are easily the most memorable part of the movie. I have cringed at the idea of digitizing actors since the day they made Fred Astaire dance with a vacuum cleaner in a TV commercial, but this is the opposite. Sometimes, technology can make movies more human.