Young Plato: an Inspiring Documentary That Proves You Are Never Too Young to Philosophize

You can add the name of Kevin McArevey to the list of inspiring teachers on film. The Principal at Holy Cross Boys School in Belfast, North Ireland, is a staunch believer in philosophy and uses it to teach small children how to deal with the hard things in life. His efforts are the subject of Young Plato, a new documentary by Neasa Ní Chianáin and Declan McGrath.

McArevey holds a black belt in Jiu Jitsu. He is physically imposing and sports a shaved head. His warmth and idolatry of Elvis Presley may catch you off-guard. He first encountered philosophy as an undergraduate student. “I studied all the modern philosophers: John Locke, Thomas Hobbes, Karl Marx, Georg Hegel, and I remember thinking, ‘I love the way these people think!' But never in a million years would I have thought I would bring this into a classroom. As the vice principal, I was all about making things very creative, and looking at different ways to engage children. When I sort of exhausted everything, I thought ’what’s next? ’ And the Principal said to me ‘Try philosophy.' ”

With the help of Pete Worley of The Philosophy Foundation, he set the ball rolling. School staff received training. Parents got a philosophy discussion group or their own. It all led to establishing regular philosophy classes for children. The effects were soon visible outside the classroom. A new way of engaging with personal relationships emerged. Critical thinking became second nature to them. When McGrath heard the story, he reached out to Chianáin. Together, they began to plan how to bring it to the screen.

''Our children are much smarter than we give them credit for''

Young Plato includes disarmingly frank scenes of children pondering heady subjects: death, violence, and addiction. It may be shocking for viewers whose default mode is to shield kids from these problems. “Our children are much smarter than we give them credit for,” says the teacher. The dynamic of a Socratic discussion allows him to guide his young pupils through the process of sorting out their feelings. “I would have a group of 7, 8 years old, sitting together, in that short of horseshoe formation. We would talk about death. I would give them a wee story about, say, a cat that died and how this girl was so traumatized by it. I would say, ‘Has anybody ever had that happen to him?’ ‘I have, sir. ‘And what did you do?’ ‘When my dog died, I would go to my phone and see pictures, and bring back memories of my dog,' ” says McArevey. “Children teach children how to deal with death, not me!”

“I learn from their experience. When it comes to themselves, they would reflect on what friends said and not what the teacher said. It is much more helpful to them. It is brave for a teacher to step back and let that happen.”

Cianáin and McGrath infiltrated school life to capture these moments. They had to slim down the crew to the minimum. “It was just us. I did the camera, and Declan did the sound. We knew we could not become a distraction for the children. We went there about three days every week, minimum. So the children became incredibly used to us and just accepted us as part of their daily routine. It is all about the intimacy you capture between the camera and what is going on in the classroom. We asked Kevin if we could also have a room in the school where we could retreat when we were not filming so that we would not be hanging around in the corners.” A larger crew was involved in filming exterior and establishing shots. 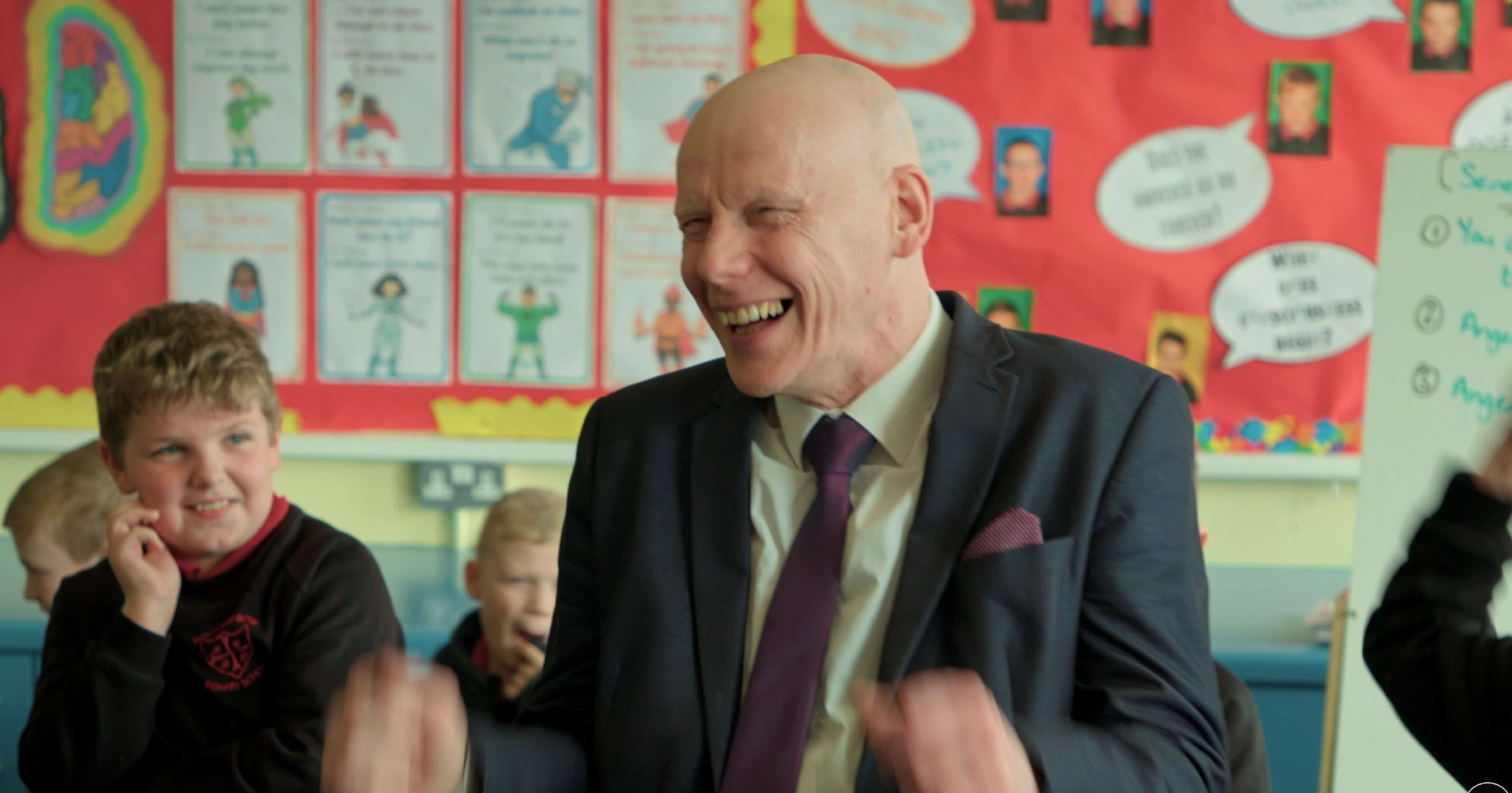 The pandemic derailed plans of covering a school year. “Originally, we were supposed to film from September 2019 until June 2020. And then COVID happened in March, so the school closed down. We had to go back the following September 2020, and filmed until Christmas. Things had changed. We lost some students because they had graduated during the COVID period and moved on. We lost some storylines. It was very challenging to find a complete narrative arc,” says Cianáin. The shutdown manifests with an ominous scene showing steel blinds closing down on the school windows. It sends a chill down your spine, but you would be hard-pressed to find fault with the narrative carved out of over 200 hours of raw footage.

Young Plato needs to bring international audiences up to date on the subtleties of Irish history. Holy Cross is in Ardoyne, one of the poorest districts of Belfast. Aerial shots of the city reveal peace lines, massive walls that separate republicans from loyalists, protestants from Catholics. If anything, our ignorance can make us identify more with the children. We, like them, are trying to understand.

“Ardoyne is a catholic enclave surrounded by a unionist community. They are kind of an island on their own. It is a unique situation. It can become very hostile and fragile. We needed to convey that to the audience for them to understand the historical context; and how incredible it is that the school operates the way it does against this backdrop. Anyone, at any time, can squash the surface and start picking up and throwing rocks again. And Brexit did an awful lot to raise tensions and polarize the two communities again,” says Cianáin. 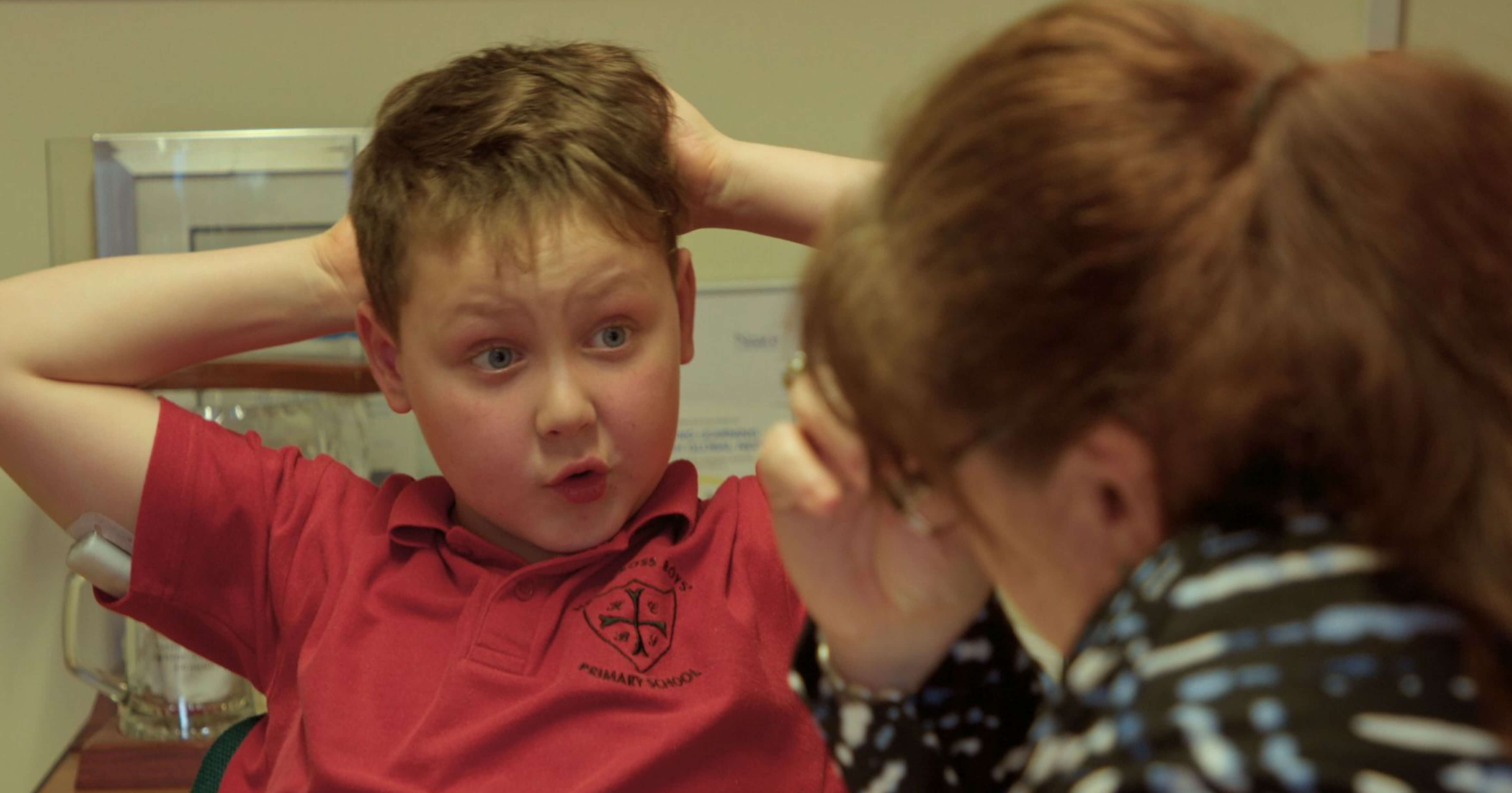 “When you do an observational documentary, you are filming in the present. So we filmed the local history classes the school gave the children, and we just made sure that we would be there for the two key moments in Ardoyne's history. One was in 1969 when Catholics' homes were burned down. Then, in 2001, when girls from the sister school of Holy Cross Boys were stopped on the way to school by some unionists. They prevented them from reaching the school because they had to cross through a unionist area.”

The movie finds ways to seamlessly use news archival footage to bring the viewer up to date on the forces at play. Editor Philippe Ravoet seamlessly embeds archival footage beyond these specific scenes. “I think it manages to paint a much more holistic picture of what happens,” concludes the co-director.

As specific as the troubles of Ireland can be, for Cianáin, their movie is universal in its appeal. “We live in incredibly challenging and dark times,” she says. “What happens here could be transposed to anywhere in the world, where there is any sort of conflict or two different tribes living.” McAvery finds hope in his young pupils and their real-life exercise of philosophy. "We need to get back to talking, back to dialogue, back to conversation, because that is where it all happens.”

* Young Plato is playing in theaters in major cities across the US.